Irritable bowel syndrome (IBS) is one of the most common functional gastrointestinal disorders and when compared to the vast knowledge pertaining to adults with IBS, very little is known about IBS in children and adolescents. We aimed to explore the prevalence of IBS, identify symptoms and contributing factors and also to examine the efficacy of trimebutine maleate in children and adolescents.

The study involved 345 children and adolescents (4-18 years) and parents were requested to fill in a questionnaire, Rome III criteria was used to diagnose IBS. To exclude organic disease, all patients underwent medical investigations. Half of the randomly selected IBS patients were treated with trimebutine maleate while the rest of IBS patients were not. The IBS patients were reevaluated at the end of 3 weeks.

The prevalence of IBS according to Rome III criteria in children and adolescents was 22.6% and IBS with constipation was the predominant subtype. Back pain (OR, 6.68), headache (OR, 4.72) and chronic fatigue (OR, 3.74) were significantly higher in IBS group. The prevalence of IBS in both parents and depression in mothers was greater for the patient group than the healthy controls ( < 0.0001). The prevalence of functional dyspepsia in IBS group was 80.8% and was significantly higher than control group. Clinical recovery was seen in 94.9% of the trimebutine maleate group versus spontaneous recovery in 20.5% of the non-medicated group. The difference was significant ( < 0.0001).

IBS is a common disorder in children and adolescents. IBS is closely associated with somatic and familial factors. Trimebutine maleate is effective for pediatric IBS patients.

Irritable bowel syndrome (IBS) is one of the most common causes of recurrent abdominal pain in the pediatric population.1 Studies have estimated the prevalence of IBS to range between 6% and 14% in children and between 22.0% and 35.5% in adolescents.2-4 Furthermore, IBS has a significant impact on quality of life of affected children,5 which highlights the clinical importance of the disease.

IBS as described by the Rome III criteria includes weekly symptoms of abdominal pain or discomfort accompanied by changes in bowel patterns. These include changes in bowel movement form or frequency at the onset of pain and/or relief of pain with defecation.6

Trimebutine maleate, an opioid agonist that acts on the peripheral delta, mu and kappa receptors, is used in the treatment of IBS.7

We examined the incidence, distribution, symptoms, and factors triggering IBS according to the Rome III criteria in patients visiting a pediatric clinic for any reason. We also examined the efficacy of trimebutine maleate treatment in randomly selected children with IBS in a randomized controlled study.

The study enrolled 345 children who were admitted to the general Pediatrics Clinics of the Cerrahpaşa Medical Faculty Pediatric Department for various reasons from August, 2007 to May, 2008. Their ages ranged from 4-18 years. The children were selected randomly. To investigate the epidemiology of IBS, their parents were asked to complete a modified version of the questionnaire on Pediatric Gastrointestinal Symptoms, Rome III version, consisting of 35 questions. Based on the questionnaire results, those patients who met the Rome III criteria, with a normal physical examination and growth curve, were pre-diagnosed with IBS. All patients underwent a complete evaluation including blood count, erythrocyte sedimentation rate, and stool examination for occult blood, leukocytes, ova and parasites (independently collected 3 stool specimens were examined).

The 78 patients with normal laboratory results were diagnosed with IBS and designated as the patient group. Of these, 39 selected at random were administered with trimebutine maleate (3 mg/kg/day, 3 doses in a day) for 3 weeks. The remaining 39 patients did not take any medication. After 3 weeks, the patients and their parents were reevaluated regarding symptoms. We used 'adequate relief' as the primary outcome measure at the end of the 3 weeks of trimebutine maleate treatment. Parents were asked to answer 'Did your child have adequate relief of his/her IBS pain and discomfort in the past 7 days?' and subjects could answer 'yes' or 'no.' Responder was defined as a subject whose parent answered 'yes'.

Based on the questionnaire, 214 cases with no abdominal pain for at least for 2 months were considered as the healthy control group.

Numerical data (quantitative) are reported as means ± SD. Categorical data (nominal) are reported as the number of people in a group (n) or percentage (%). Categorical variables in the patient and healthy control groups were compared using the chi-square test. The Mann-Whitney U test was used for nominal variables. Results were assessed by the 95% CI and significance at P < 0.05. Statistical analysis of the data was performed using the Statistical Package for the Social Sciences (SPSS version 15.0 for windows; SPSS Inc., Chicago, IL, USA).

In our study, the prevalence of IBS in patients admitted to general pediatrics clinics in our tertiary center was 22.6%, as diagnosed based on the Rome III criteria.

The prevalence of IBS in parents was greater for the patient group than the healthy controls (P < 0.0001). The Rome III criteria for adults were used to diagnose IBS in the parents of the children studied (Fig. 2).

Clinical recovery was seen in 94.9% of the trimebutine maleate group versus spontaneous recovery in 20.5% of the non-medicated group. The difference was significant (P < 0.0001).

According to the studies, the prevalence of IBS ranges from 6-14% in children and 22.0-35.5% in adolescents in Western countries.2-4 A recent Chinese survey of students determined that the prevalence of IBS in children and adolescents was 20.7% according to the Rome III criteria.8 In our study, the prevalence of IBS in children 4 to 18 years old was 22.6%, which is higher than that detected using the Rome I and II criteria. The main difference between the pediatric Rome III and II criteria is that the duration of abdominal pain was reduced from 3 to 2 months. In a study conducted in Sri Lanka, the Rome II and III criteria were used to diagnose functional gastrointestinal system disorders; 60% and 71% of children were diagnosed with functional gastrointestinal system disorders using the respective criteria.9 Therefore, the Rome III criteria are considered more effective for diagnosis of functional gastrointestinal system disorders.

Our study was patient based and done in a tertiary hospital. Also children and adolescents in Turkey are devoted to their studies, and many attend private cramming schools on weekends to increase their probability of passing the entrance examinations for prestigious senior high schools and colleges. This, and the changing lifestyle due to urbanization, put them under stress. These factors might explain the high prevalence we report here.

Clinical overlap of FD and IBS according to the Rome III criteria is very common. One risk factor for FD-IBS overlap is the presence of postprandial fullness symptom.11 In a study of adults with IBS, 87% met the criteria for dyspepsia.12 Overlap between FD and IBS has been reported in pediatric studies.13 We found that the prevalence of FD in IBS patients was 80.8%, which was significantly higher than in the control group.

Tables
Table. 1. Comparison of Irritable Bowel Syndrome Patients With the Control Group According to Their Gastrointestinal Symptoms 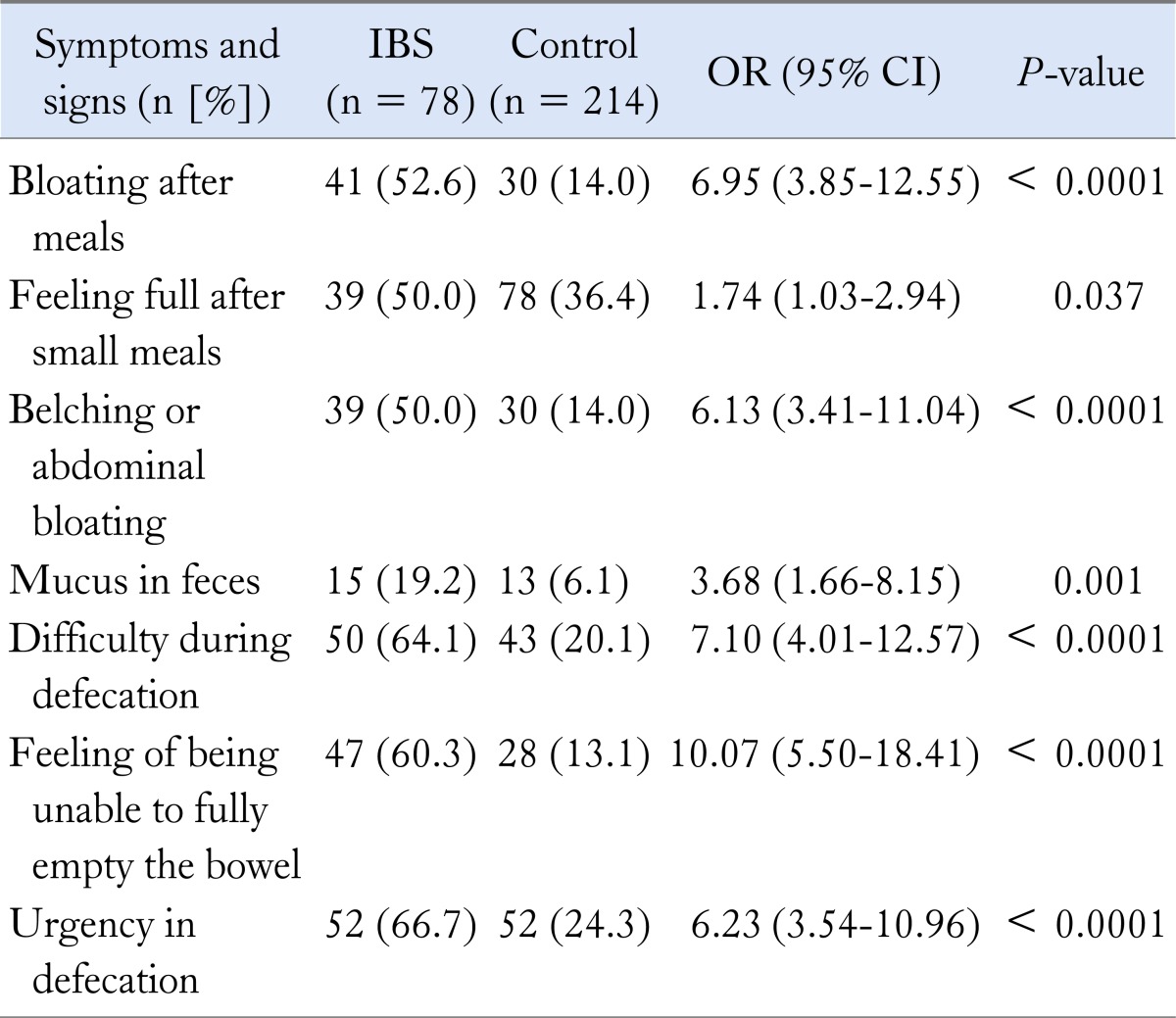 IBS, irritable bowel syndrome.
Table. 2. Comparison of Irritable Bowel Syndrome Patients With the Control Group According to Symptoms Not Related to the Gastrointestinal System