High-resolution manometry (HRM) with pressure topography is used to subtype achalasia cardia, which has therapeutic implications. The aim of this study was to compare the clinical characteristics, manometric variables and treatment outcomes among the achalasia subtypes based on the HRM findings.

Achalasia cardia is a motility disorder of the esophagus with an estimated prevalence of 0.5-1.0/100,000 population per year. It is characterized by dysphagia for solids and liquids. The other features include regurgitation of undigested food, chest pain, weight loss and respiratory symptoms.1,2 Incomplete relaxation of lower esophageal sphincter (LES) on swallowing, absence of esophageal peristalsis and elevated basal LES pressures1,2 are the findings on esophageal manometry of achalasia cardia. High-resolution manometry (HRM) is replacing conventional pull through manometry as it is more sensitive and easier to perform and analyze.3-5 HRM provides detailed pressure topography of the esophagus and allows a better identification of compartmentalized distal esophageal pressurization than conventional manometry.6-9 HRM with pressure topography is being used to classify achalasia into different subtypes.10,11

The study was conducted at the Asian Institute of Gastroenterology, Hyderabad between January 2008 and January 2009. The patients underwent HRM and found to have impaired LES relaxation were further analyzed. They underwent an upper gastrointestinal endoscopy to rule out secondary achalasia. The study protocol was approved by the Asian Institute of Gastroenterology Institutional Review Board. The inclusion and exclusion criteria were as follows: patients of any age presenting to the outpatient department or referred for esophageal manometry and diagnosed as achalasia cardia were included. Patients were excluded with the followings: (1) previous treatment for achalasia cardia, (2) patients with esophageal lesions such as webs, rings, strictures or malignancy of esophagus or stomach, (3) previous history of esophageal or gastric surgeries and (4) history of nasal surgery during the last 6 months.

Manometry was performed with a 16 channel water perfused catheter which has 8 channels 1 cm apart at the lower end and the remaining 8 channels 3 cm apart (Dent sleeve International Limited, manufactured by Mui scientific, Ontario, Canada). The data were analyzed using Trace 1.2 V software (Geoff Hebbard, Royal Melbourne Hospital, Victoria, Australia). The manometry catheter was introduced by the transnasal route. The protocol included a basal LES pressure recording for 3 minutes, followed by ten 5 mL wet swallows with an interval of 30 seconds between each of the swallows.

The patients with impaired LES relaxation were divided into 3 subtypes based on the dominant feature of the distal esophageal pressure after swallowing.10,11 Clinical, manometric variables and treatment outcomes were compared among the 3 subtypes. For type I achalasia (classic achalasia), the distal esophageal pressure was less than 30 mmHg in more than 8 out of the 10 wet swallows (Figure A). For type II achalasia (achalasia with esophageal compression), at least 2 out of the 10 wet swallows were associated with a pan esophageal pressurization greater than 30 mmHg (Figure B). For type III achalasia (spastic achalasia), there were 2 or more spastic contractions (contractile front velocity [CFV] > 8 cm/s)11 with or without periods of compartmentalized pressurization (Figure C). The CFV was calculated from the slope of the line connecting the 30 mmHg isobaric contour at the proximal margin of S2 and the distal margin of the S3. Endoscopic pneumatic dilatation was performed using a Rigiflex balloon with a 35 mm diameter (Microvasive). The balloon was placed over an endoscopically introduced guide wire and positioned across the LES. After confirmation of the position by fluoroscopy, the balloon was left inflated for 1 minute. The need for further dilatation was determined by the persistence of symptoms 4 weeks after treatment. The patients were followed for 6 months after endoscopic pneumatic dilatation. A successful treatment response was defined as symptomatic relief requiring no further intervention up to 6 months after a single intervention.13

Eighty-nine of the 900 patients who underwent HRM were diagnosed as achalasia cardia. Fifty-one patients with a mean follow-up of 6 months were included in the study.

Types I and II achalasia were observed in 24 patients each and type III achalasia in 3 patients. The mean age of patients between types II and III were similar, compared to type I with younger age (P = 0.577). The male to female ratio in all the groups were similar (P = 0.662). Dysphagia and regurgitation were more frequently presenting symptoms in types I and II (P < 0.001 and P = 0.057, respectively) than type III. The patients with type III had a higher incidence of chest pain when compared to the others (P = 0.041) (Table 1).

An intergroup analysis was performed to investigate the differences in terms of clinical variables and manometric parameters among the 3 subtypes (Table 2). The clinical variables were not significantly different among the 3 subgroups except chest pain in type III achalasia. However, the manometric parameters were different among the 3 subgroups. The patients with type III had spastic contraction in most of the swallows, and also had higher basal LES pressure and maximal esophageal pressurization when compared to types I and II (P < 0.001) (Table 1). For patients with type II achalasia, the swallows were associated with compression while the patients with type I had failed swallows.

Endoscopic pneumatic dilatation was performed in 45 out of the 51 patients, endoscopic injection of botulinum neurotoxin in 4, pharmacological treatment in 1 and Heller's myotomy in 1 respectively. Since the number of patients who underwent botulinum toxin injection and surgery were small, they were not included in the clinical outcome analysis.

This is the first manometric study of the Indian population to classify the subtypes of achalasia. The frequency of subtypes I and II was the same in the present study, different from the findings reported by Pandolfino et al10 where type II was more common.

Type I achalasia was more common in the younger age group with dysphagia and regurgitation as the main features. Type II achalasia had similar features to type I except age (Table 1).

The cause of chest pain, a common symptom associated with achalasia, remains unknown. Eckardt et al15 studied chest pain in patients with achalasia and reported an association with a younger age and short duration of symptoms. However, there was no correlation with the manometric or radiographic findings. In our study, patients with type III achalasia had chest pain. The pathogenesis of chest pain associated with type III achalasia may be related to the high esophageal pressurization.

The major finding in our study was that HRM could predict the response to endoscopic pneumatic dilatation in achalasia. Type II achalasia was a strong positive predictor of response to endoscopic pneumatic dilatation and type III achalasia was a strong negative predictor. Patients with type II achalasia tended to have a less severe dilatation of esophagus compared to type I and might represent an early stage of the disease. Hence, they responded better to treatment. Patients with type I tended to have severe esophageal dilatation due to prolonged functional obstruction at the LES with minimal contractility of esophageal body and might represent a late stage in the natural history of achalasia. Patients with type II had preserved longitudinal muscle contraction and sufficient excitation of the circular muscle to generate substantial intrabolus pressure in the esophageal body. Thus, reduction of the LES pressure with therapy would give good response to these patients.

In conclusion, this study presented the clinical and manometric predictors for treatment response of achalasia and the clinical usefulness of HRM. The results showed that the patients with type II achalasia responded better to endoscopic pneumatic dilatation compared to the others. The subtyping of achalasia by HRM may allow the clinician to direct therapy and predict outcomes.

Tables
Table. 1. Clinical and Manometric Characteristics of the Achalasia Subtypes

LES, lower esophageal sphincter.
Table. 2. Comparison of Clinical and Manometric Characteristics among the Subtypes of Achalasia 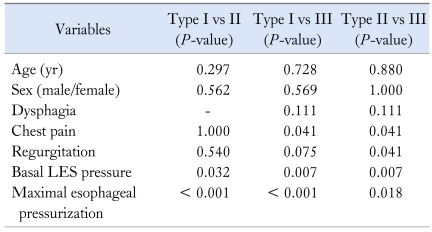