A 73-year-old man with hypertension and variant angina presented with chronic diarrhea and weight loss of 7 kg persisting for several months. He reported up to 10 watery evacuations accompanied by abdominal pain daily. He had visited 2 other Korean tertiary care centers without a diagnosis before being transferred to our hospital. Following empiric treatment with a 2-week course of steroids and ganciclovir for suspected eosinophilic and Cytomegalovirus gastroenteritis, respectively, at another hospital, there was no improvement. He had anemia (hemoglobin: 8.3 g/dL) and hypoalbuminemia (with serum albumin: 1.0 g/dL). 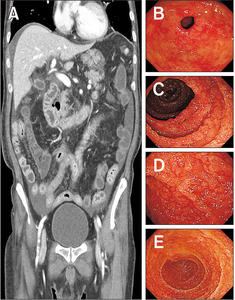 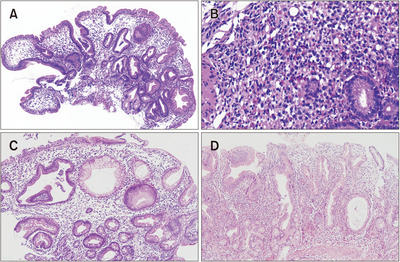 The patient had been taking 160 mg valsartan and 20 mg irbesartan daily for the past 10 years and 2 years, respectively, to treat hypertension. As drug-related enteropathy was suspected, the use of both valsartan and irbesartan was suspended. Diarrhea subsided immediately following drug discontinuation. Follow-up endoscopy 2 weeks later showed improvement in duodenal scallops and grooves (Fig. 1E). Five months after the withdrawal of both ARBs, serum albumin level improved to 3.8 g/dL, and body weight increased from 44 kg to 56 kg.

The clinicopathologic features of our case correspond with those of previously reported cases of olmesartan-associated enteropathy.2-4 The average duration of drug exposure typically ranges from months to years; however, cases occur up to 13 years after drug exposure.5,6 Our patient had been taking 2 types of ARBs and developed symptoms 10 years and 2 years after the initiation of valsartan and irbesartan, respectively. Although the pathogenesis of ARB-associated enteropathy is unclear, it may be mediated by the binding of angiotensin II to the angiotensin II receptor, resulting in intestinal epithelial apoptosis.7

Endoscopic findings are non-specific, so pathologic diagnosis is important. In this case, the most common pathologic findings were sprue-like mucosal injuries, namely, villous blunting and crypt hyperplasia. Villous blunting is the most important feature that distinguishes sprue-like enteropathy from eosinophilic gastroenteritis. In addition, in ARB-associated enteropathy, eosinophils may locally increase without predominance, whereas diffuse eosinophilic infiltration is characterized in eosinophilic gastroenteritis. Although histologic findings alone are not sufficient for the diagnosis of ARB-associated enteropathy, they can lead to an accurate diagnosis in an appropriate clinical context.

Recent studies and systematic reviews showed the association between enteropathy and olmesartan8 and other ARBs including telmisartan,6 valsartan, irbesartan, losartan, and eprosartan. To date, ARBs have not been shown to increase the risk of intestinal malabsorption in the Korean population.9 To the best of our knowledge, this is the first case of ARB-induced sprue-like enteropathy reported in Korea. Given that ARB-associated enteropathy is rarely suspected, it may currently be underdiagnosed in Korea. Therefore, it should be considered in patients with diarrhea and weight loss, particularly in those taking hypertensive medication.