Although the knowledge regarding the human microbiota composition in the gut is vast, the composition of human microbiota in the esophagus is only partially understood. The microbiota in the esophagus under normal circumstances had been considered as a transitional microbiota originating from the oral cavity and oropharynx.1,2 However, as new techniques such as 16S ribosomal RNA (rRNA) gene sequencing have been introduced, it is now known that the esophagus has a remarkably diverse microbiota that depends on several factors.3,4 The genera , and are known to be the major components of the microbiota in a healthy esophagus.5-7 In addition, a previous study reported that dysbiosis, which is associated with the presence of gram-negative taxa, is associated with gastroesophageal reflux disease, Barrett’s esophagus, and eventual adenocarcinoma.5,7-9

We collected 2 samples, esophageal mucosal biopsies and esophageal retention fluid. We developed collecting methods especially for this research project to avoid potential contamination. First of all, we used gloves and followed aseptic procedures with sterile equipment. A standard video-endoscope was passed through the mouth to the esophagus without touching the oropharynx as carefully as possible and we avoided unnecessary suction. The stasis liquid in the esophageal lumen was aspirated via an endoscopic working channel. We connected tubing (disposable specimen trap) which was used in bronchoscopy (HS-SP-50; Hyupsung Medical Co, LTD, Seoul, Korea) for fluid collection at the entrance of the working channel to avoid contamination. After finishing the fluid collection, biopsies were then taken 2 cm above the squamocolumnar junction using sterile disposable biopsy forceps (EndoJaw; Olympus Co, Ltd, Tokyo, Japan). If there was no retention fluid in esophagus after POEM, we aspirated by washing the esophageal lumen with 10 mL of sterile saline solution. We collected samples twice on the day before or on the day of the POEM and 8 weeks after POEM. The biopsy and fluid samples were placed in a test tube (SNP BiomCare; SNP Genetics Inc, Seoul, Korea) and stored at –70°C. We administered broad-spectrum intravenous antibiotics 30 minutes before the start of the POEM. During the POEM procedure, prophylactic antibiotic solution spraying inside the tunnel was performed before closing the mucosal entry. The use of intravenous antibiotics was discontinued 3 days after the POEM and antibiotics were switched to oral intake for another 7 days.

The biopsy and fluid samples (3-10 mL) were centrifuged at 15 000 g for 20 minutes at 4°C to separate the cellular pellet and the cell-free supernatant. DNA was extracted from the pellet using a QIAamp DNA Microbiome Kit (Qiagen, Valencia, CA, USA) according to the manufacturer’s instructions.

The primary analysis of the obtained sequences consisted of their demultiplexation with the MiSeqReporter software (Illumina). The paired-end sequences of each sample were then exported from the MiSeq system for analysis in the FASTQ format. Bioinformatic analysis of the sequences was performed using the QIIME2 package.17 For subsequent data analysis, we used a web-based platform called MicrobiomeAnalyst.18 The sequences were then clustered against the 2013 Greengenes (13_5 release) 97% reference dataset of the ribosomal database.19 The UCLUST algorithm was used to cluster sequences that did not match any entries in this reference into de novo operational taxonomic units (OTUs) at 97% similarity. The OTU table was rarefied to a sequencing depth of 20 000 per sample for subsequent analyses.

Taxonomic analyses were performed after collapsing the OTUs at the genus level. The alpha diversity of each sample was assessed using the Shannon index. Beta diversity was determined based on the Bray-Curtis index distance method using permutational MANOVA, and principal coordinate analysis plots were constructed. The statistical significance of the esophageal microbiota structure between different sampling sites and gut regions was assessed by the non-parametric univariate Mann-Whitney/Kruskal-Wallis test. The linear discriminant analysis effect size (LEfSe) was used to identify significantly different abundances in the bacterial taxa. The false discovery rate correction was used for multiple tests. A -value of < 0.05 was considered statistically significant.

Characteristics of the Studied Cohort

Table 2 . Changes of Nutrient Intakes per Daily According to Pre- and Post-peroral Endoscopic Myotomy

Table 3 . Most Common Bacterial Phyla According to in the Tissue and Fluid Samples Pre- and Post-peroral Endoscopic Myotomy 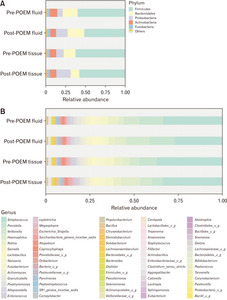 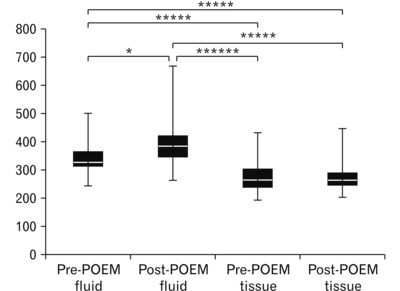 We evaluated the alpha diversity using Shannon analysis (Fig. 3A) and the beta diversity using the Bray-Curtis index (Fig. 3B) among the 4 groups. The results indicated that the structure of the esophageal microbiome in the tissue samples was significantly different from that of the fluid samples.

The study of esophageal microbiota has advanced from a culture to a culture-independent method. In addition, the methods used to collect esophageal microbiota samples are varied – from biopsies, aspirations, brushes, and esophageal string tests.20 In this study, we collected esophageal samples from patients with achalasia in 2 ways: biopsy and aspiration. Most studies have evaluated the esophageal microbiome using tissue biopsies, which would be the most suitable method, considering the presence of an adherent microbiome at mucosa of esophagus. However, sampling by brushes or aspirates was adopted and this was a less invasive method and used as an alternative to esophageal biopsies. However, esophageal biopsies are always necessary for a direct histological assessment of the diseased tissues in order to avoid misclassification and decrease the risk of contamination by oropharyngeal or gastric secretions. In this study, the bacterial communities in the esophageal tissue and fluid groups pre- and post-POEM were structurally different, with the alpha diversity (OTU number) decreasing from the fluid to tissue samples. Previous studies have reported that reduced microbial diversity, in itself, is a disease status, such as inflammation or cancer.21,22 Therefore, the microbiota of the esophageal tissues may play a pivotal role in patients with achalasia, as the microbiota of the esophageal fluid group is translocated from the oropharynx. Using LEfSe, we identified specific bacterial taxa associated with the esophageal tissue in patients with achalasia, which were the genera , and . Interestingly, our results showed that at the genus level, and were enriched in the esophageal tissue samples, which are abundant in esophageal adenocarcinoma.20 Whereas in the esophageal fluid, the genus was abundant, which is seen to be increased in GERD and Barrett’s esophagus.20 Although there is a controversy, regurgitation is frequently observed in patients who have achalasia. Several studies utilizing 24-hour pH monitoring show that untreated achalasia patients experience true reflux. The reasons are that there is a portion of overlap between achalasia and GERD and the refluxed gastric contents in patients with achalasia may be poorly cleared from a dysfunctional esophagus, causing substantial retention. The prevalence of squamous cell carcinoma in patients with achalasia is higher than that in the general population.14 A possible explanation for this phenomenon could be chronic esophagitis due to stasis and bacterial overgrowth.23 The metabolism of nitrates by bacterial species could be involved in carcinogenesis. However, the association between the esophageal microbiota and cancer needs to be studied in future research.

This is the first study to show the esophageal microbiota in patients with achalasia using 16S rRNA sequencing to the best of our knowledge. The most common bacterial phyla in normal esophagus are Firmicutes (70-87%), Bacteroidetes (5-20%), (2-5%), Actinobacteria (2-4%), Fusobacteria (1-2%), and TM7 (0-1%).24,25 And in other studies, the most common bacterial taxa in a normal esophagus include , and .20 In Barrett’s esophagus, the most common bacterial phyla are Firmicutes (50-55%), Proteobacteria (20-22%), Bacteroidetes (14-19%), Fusobacteria (2-9%), Actinobacteria (2-7%), and TM7 (0-1%).3,25 is the representative bacterial taxa of Firminutes phylum. , and were more abundant in the reflux esophagitis group than in the normal group. In esophageal adenocarcinoma, the proportion of Firmicutes phylum decreased and proportion of , and increased in patients with esophageal adenocarcinoma. Until now, there is an only 1 study regarding esophageal microbiome in achalasia. In patients with achalasia, and were found to be the most abundant genera using the culture method.14 In this study, the predominant taxa was Firmicutes among all groups, although we did not evaluate the esophageal microbiota of healthy controls. and were enriched in the esophageal tissue samples, which are abundant in esophageal adenocarcinoma. Whereas in esophageal fluid, the genus was abundant, which is seen to be increased in GERD and Barrett’s esophagus.

Many factors affect the bacterial composition in the esophagus such as aging, dietary fiber intake, proton pump inhibitors, and diseases that cause esophageal dysbiosis.26,27 We conducted a dietary survey of patients with achalasia in this study. It is reported that many patients with achalasia complain of discomfort such as dysphagia, vomiting, decreased appetite, and chest pain, which can lead to weight loss and nutritional deficiencies.28,29 As a result of the survey analysis, nutrient intake pre-POEM was insufficient, and the nutrient intake was significantly improved after POEM in most patients. However, a long-term lack of energy and protein intake can have a direct effect on weight and muscle loss.30 In addition, even after POEM, there were still many nutrients (energy, vitamin A, vitamin C, vitamin B2, niacin, calcium, and magnesium) whose levels in patients did not meet nutritional recommendations.31 Although this study did not analyze the relationship between food intake and the microbiota, the nutrient intake status results show the need for early nutritional intervention and management in patients with achalasia. In addition, decreased acid reflux by PPI administration could affect the esophageal microbiomes. Amir et al32 reported that esophageal microbiome in patients with Barrett’s esophagitis, or a normal distal esophagus, was assessed from distal esophageal biopsies, comparing results before versus after PPIs. After PPIs were administered, Lachnospiraceae, Comamonadaceae, and unclassified Clostridial families significantly increased in distal esophagus.

This study has some limitations. First, we did not investigate the microbiome in the oral cavity of the patients and healthy controls. Therefore, we did not determine the origin and role of the oesophageal microbiota in patients with achalasia. Second, the sample size was not sufficient for subgroup analysis according to the type, symptom duration, and severity of disease. Finally, we performed the rarefraction. Rarefying has been criticized as a normalization technique because data can be omitted through the exclusion of either excess sequences or entire samples, depending on the rarefied library size selected.33 However, from another perspective, rarefying enables (1) characterization of the variation introduced to diversity analyses by this random subsampling, and (2) selection of smaller library sizes where necessary to incorporate all samples in the analysis.34 In this study, subsampling via rarefying was also a necessary process to include all possible samples in the analysis.

The sequencing output was uploaded to NCBI SRA archive (Accession No. PRJNA756810).

This study was financially supported by a faculty research grant from Yonsei University College of Medicine (6-2017-0154), and by a grant from the Korean Society of Neurogastroenterology and Motility for 2019.