TO THE EDITOR: Combined multichannel intraluminal impedance and esophageal pH (MII-pH) monitoring is the preferred method for assessing gastroesophageal reflux (GER) because it permits (1) detection and analysis of both acid (pH < 4.0) and non-acid (pH ≥ 4.0) GER, and (2) monitoring of proximal extent of individual GER events.1 The duration of a GER episode is always assessed in the distal-most impedance channel (Z6) because total bolus exposure is greatest nearest the lower esophageal sphincter. By definition, a GER episode begins when impedance drops to 50% of baseline (Z6) and is cleared when impedance again ascends to ≥ 50% of baseline (Z6). By convention, an impedance-detected event is not counted if the duration is not ≥ 5 seconds.2,3 MII-pH software uses these guidelines to run preliminary GER autoscans to reduce observer burden. Due to low autoscan specificity, expert opinion has recommended against analysis of MII-pH tracings using only the autoscan feature for infants and children.4 They also suggest that automated GER detection needs to be refined by consensus in order to derive meaningful autoscan results.4 It is important to note that automated analysis overestimates the frequency of reflux events, in particular, non-acid GER events.4-7

Occasionally, the MII-pH autoscan will mark an event that, on first glance, appears to be a legitimate single reflux event (for example, Figure A) but upon further inspection, it becomes clear that the software algorithm actually combined 2 events. This happens when the impedance waveform in the distal channel of the first event does not reach 50% of baseline before the overlapping second event enters the esophagus (Figure B). In this particular example, separation results in 2 GER events with durations that are both less than 5 seconds (3.9 seconds and 4.3 seconds). Figure C depicts a contour plot that confirms the conjoined/superimposed event. This image was captured as part of an assessment of a 3-week-old male who was referred to our facility for symptoms suggestive of GER. 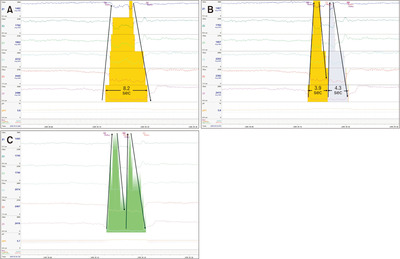 Figure 1. Superimposed non-acid gastroesophageal reflux event separated during the manual analysis. (A) It shows the suboptimal autoscan marking that combined 2 non-acid gastroesophageal reflux (GER) events. (B) It shows the manual separation to produce 2 non-acid GER events with durations below the 5 second guideline. (C) It is a contour plot supporting the “re-reflux/conjoined/superimposed” relationship of the 2 events.

Loots and colleagues4 reported that the majority of MII-pH observers in their inter- and intra-observer study indicated that they tag GER events that fail to meet accepted guidelines because they felt that the guidelines were inadequate. While the specific guidelines that were ignored were not detailed, it is likely that these would include (1) minimum duration of 5 seconds, and (2) the requirement for the impedance waveform in the Z6 channel to reach 50% of baseline to signal the end of bolus clearance. There are likely many instances wherein an observer who frequently assesses MII-pH tracings will encounter a GER episode during which the duration in the distal channel is less than 5 seconds, and/or the baseline impedance is low and the 50% baseline target is not achieved. Because determining the frequency of GER is an important component of the MII-pH report, the event described here provides an example of where revisiting the impedance tracing analysis guidelines to include GER events wherein (1) bolus duration is < 5 seconds, and (2) the end of bolus clearance is not 50% of baseline.

Our experience has been that when one of these conjoined/superimposed events is encountered in a tracing, the observer can usually expect to see others. To our knowledge, this is the first time that a non-acid re-reflux/superimposed event has ever been reported. Previous reports have described re-reflux/superimposed events as being associated only with acid reflux.2,8-10 Additional investigation is needed to further examine the potential clinical value of these events as they may relate to the pathogenesis of GER disease in infants, in particular, who experience large numbers of non-acid GER events and have underdeveloped reflux barriers.