High-resolution manometry (HRM) and the derivation of esophageal pressure topography (EPT) metrics1,2 has enhanced knowledge of esophageal physiology and enabled clinical translation for diagnosis of esophageal motor disorders via the Chicago classification (CC) algorithm (current version 3.0).3 The CC defines lower esophageal sphincter relaxation, with relaxation failure required to diagnose achalasia and esophagogastric junction outflow obstruction (EGJOO). Four-second integrated relaxation pressure (4s-IRP) is, however, a complex metric influenced by both the intrinsic relaxation of the lower esophageal sphincter, extrinsic compression by the crural diaphragm and contact artefact generated by luminal impingement onto the catheter.4 In the case of EGJOO, concerns have been raised over the clinical significance of high values for 4s-IRP leading to a high rate of EGJOO diagnoses and the potential for misdiagnosis and in turn inappropriate treatment.5-9

Studies have shown that esophageal intraluminal impedance can determine the phases of luminal bolus distension and how they relate contraction during esophageal bolus transport. Directly linking bolus flow to pressure may reveal mechanisms of symptom generation.10-14 A range of adjunctive integrated pressure-flow metrics can be derived by combining impedance topography with manometry to better quantify the pressures generated within the intrabolus domain during esophageal bolus transport.15 It remains to be determined whether these novel integrated metrics may play a role as adjunct measures to confirm restricted esophageal emptying. In this study we measured the effect of vertical leg-lift, a protocol designed to induce an EGJOO-like experimental scenario by artificially increasing the gastric pressure, thus creating a greater pressure differential against which the esophageal peristalsis must work to enable complete esophageal emptying of a swallow bolus into the stomach. We hypothesized that leg lift would increase bolus domain pressures and delay esophageal emptying with associated physiological changes such as augmentation of contractile forces.

Between August 2018 and July 2019, we prospectively enrolled consecutive patients with gastroesophageal reflux disease (GERD) symptoms. Patients diagnosed with normal motility using CC version 3.0 criteria3 were included. The exclusion criteria consisted of: nasolaryngeal esophageal stricture; history of thoracic, esophageal or gastric surgery; and musculoskeletal disorder that would limit the patients’ mobility. Patients with dysphagia symptoms were also excluded. The medical records of included patients were reviewed, and demographic information, medications, medical and surgical history were extracted. Any medication that could affect upper gastrointestinal motility was discontinued 2 weeks prior to study. All subjects were asked to complete validated GERD questionnaires and receive endoscopic examination. The presence of mucosal injury in the lower esophagus and hiatal hernia was recorded.

The study protocol was approved by the Research Ethics Committee of the Hualien Tzu Chi Hospital (IRB No. 107-180-A), confirming that the study was conducted in accordance with the ethical guidelines of the Declaration of Helsinki.

Patients fasted overnight. The HRM assembly was passed into the esophagus through the anesthetized nostril (lignocaine spray). The catheter was zeroed to atmospheric pressure and placed with at least 3 distal sensors positioned in the stomach, to record the region from the upper esophageal sphincter (UES) to the proximal stomach. While in the supine position, each patient was given 10 liquid swallows of 5 mL volume (Standardized Bolus Medium Kit for high-resolution impedance manometry [HRIM], Trisco Foods, Pty Ltd, Queensland, Australia) at 30-second intervals. After completion of baseline recording, participants were asked to gently raise both legs by flexing the hip to 40 degrees with the knees in extension for at least 5 seconds. Five 5 mL single water swallows with leg lift were then administered during HRM through a syringe. Following data acquisition, each de-identified pressure-impedance file was exported as an American Standard Code for Information Interchange (ASCII)-file and uploaded to the Swallow Gateway web-application (Flinders University, Adelaide, Australia) for analysis.16 The flowchart of the study is shown in Figure 1. 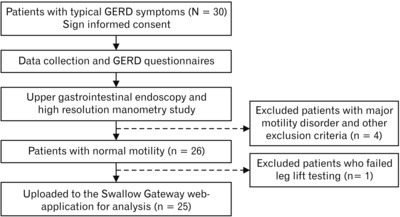 Figure 1. The flowchart of patients enrolled into the study. GERD, gastroesophageal reflux disease.

The adjunct measures used to quantify the pressures and flow-timing within the intrabolus domain are illustrated in Figure 2. These included 3 mid-domain intrabolus distension pressures (DP) during phases of esophageal bolus transport;17 namely DP during accommodation (mean DP in mmHg from UES to transition zone), compartmentalized transport (mean DP in mmHg from transition zone to esophagogastric junction [EGJ] proximal margin), and esophageal emptying (DPE, mean DP in mmHg from EGJ margin to crural diaphragm). Intrabolus ramp pressure (RP, mmHg/sec), was used to quantify pressure increase as the bolus is compressed between the esophageal contraction and the EGJ. Flow timing measures included the swallow to mid-bolus distension latency (sec), mid-bolus distension to contraction latency (DCL, sec). Impedance ratio is a parameter defining bolus clearance.15 Three of the measures (DPE, RP, and DCL) were combined to derive the Pressure-Flow Index, an experimental composite score of impeded esophageal transport.15 Finally, the period of trans-EGJ bolus emptying was estimated based on the method of Lin et al18 by using the impedance, to detect bolus presence, and the pressure to detect flow-permissive pressure gradient intervals (ie, esophageal pressure > crural and gastric pressure) within to the overall period of bolus presence. Bolus flow time (BFT, sec) was defined by the sum of the flow permissive periods. Shorter BFT reduced esophageal emptying.18 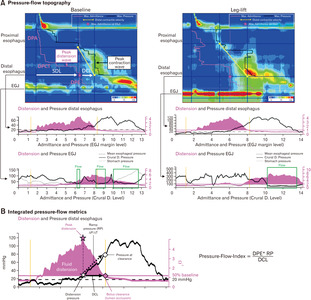 Twenty-five patients were included (mean age: 42.0 years; 52% female), 5 had globus sensation with typical GERD symptoms and the remainder reported symptoms of heartburn and/or regurgitation. None had evidence of esophagitis or hiatal hernia. The esophageal acid exposure time during diagnostic pH-monitoring ranged from 2.0-22.5% (mean: 3.0 ± 4.6%; n = 2, AET > 6%). All study participants successfully completed the protocol and no adverse events occurred. For 3 studies the 4s-IRP values were not calculable during leg lift protocol due to movement of the catheter leading to a poor intragastric pressure reading.

The effects of the leg lift protocol on EPT metrics are shown in Table 1. Leg lift caused a significant increase 4s-IRP. PCI and DCI also increased, consistent with augmented of peristaltic vigor as a physiological response to resistance. However, the effect on DCI was far more potent. There was no effect of leg lift on any of the remaining EPT variables.

The effects of the leg lift protocol on integrated pressure-flow metrics are shown in Table 2. The esophageal impedance ratio and BFT were not significantly altered by leg lift, suggesting that the experimentally induced obstruction did not lead to failure of bolus transport and/or esophageal emptying in these participants with normal motility and the ability to augment contractility in response to leg lift (increased DCI previously described). The mid-bolus distension pressures increased in response to leg lift with the effect being most significant in the distal esophagus during the esophageal emptying phase (DPE). RP in the distal esophagus was also significantly increased. The DCL was reduced, suggesting that the mid bolus distension was shifted closure in time to the contraction front. Overall, the Pressure-Flow-Index score was significantly increased by leg lift (25 [12-49] to 54 [21-246], < 0.001).

Classic research papers have described in detail the concept of there being 2 pressure domains, firstly, within the bolus and then, secondly, within the contractile segment devoid of bolus.19 However, the importance of measuring and understanding intrabolus forces and flow timing characteristics for diagnostic purposes continues to be under-recognized, primary focus being the classification of contractility patterns. The current study examined the adjunct value of combined esophageal impedance and pressure measurement to quantify forces within the moving bolus that were only previously attainable via esophageal video-mano-fluorography and frame by frame analysis. Studies have now confirmed the veracity of the method of combing and analyzing intraluminal impedance with pressure to map the trajectory of the bolus domain over space and time and to measure the forces within. Using this pressure-flow-analysis approach it is possible to derive several novel measures of flow timing, luminal area, bolus presence, distension pressure, RPs, and clearance.

The leg lift protocol is an experimental provocative maneuver that we are trialing in conjunction with routine diagnostic esophageal HRM. Whilst we report data from GERD patients, rather than asymptomatic controls, the patients included had normal baseline motility, no hiatus hernia, or esophagitis. Therefore, it was felt that they would provide a suitable cohort to examine the biomechanical changes in the esophagus induced when bolus emptying into the stomach is artificially impeded. Past studies show that abdominal compression causes outflow resistance indicated by an increase in intrabolus pressure. In our hands, the simple to perform leg lift appears to have a larger impact on pressure-flow metrics than we observed using extrinsic abdominal compression utilizing a gastric binder.20 The effect of leg lift on contractile pressures mirrors that seen with other paradigms and is the normal physiological response. As demonstrated by Dodds et al,21 passive distension by the moving bolus stimulates and augments contractility producing higher peak pressure and a longer contraction phase (both of which increase the DCI metric). Further supra-physiological increases in emptying resistance lead to greater passive distension of the esophageal lumen that further stimulates intrinsic neuro-mechanical responses via sensory afferents and polarized enteric nervous system circuits,22 and changes the pre-load, and after-load muscle tension.23 Together these factors drive the higher contractile pressures that are need to overcome obstruction, thus preventing transport failure associated with retrograde bolus escape due to the intrabolus pressure remaining below the capacity of the circular muscle to achieve lumen occlusion at the bolus tail.19 As these mechanisms were intact in the studied patients with normal motility, leg lift did not lead to failure of bolus transport (ie, IR and BFT were not altered). Further studies are needed to determine the rate of transport failure in patients with, for example, ineffective esophageal motility.

In conclusion, novel measurement and analysis methods allow comprehensive characterization of pressures within the intrabolus domain without the need for simultaneous radiology. These pressures were augmented along with the 4s-IRP during experimental outflow obstruction produced by leg lift. Further studies could explore the potential adjunct value of such measures for confirming clinically relevant EGJOO in symptomatic patients.

This study was supported by a grant, TCRD108-28, from Hualien Tzu Chi Hospital, Buddhist Tzu Chi Medical Foundation, Hualien, Taiwan. Taher Omari holds a National Health and Medical Research Council Senior Research Fellowship. The development of the swallowgateway.com website was supported by grants from the College of Medicine and Public Health, Flinders University. The other authors report no external funding for this manuscript.

Taher Omari holds inventorship of the patent family that covers some of the analytical methods described. The Swallow Gateway web application is owned by Flinders University. All other authors report no conflict of interest.