Abstract
Background/Aims
To investigate the intra-rater (test-retest) reliability of the diagnosis of functional gastrointestinal disorders (FGIDs) as measured by the Questionnaire on Pediatric Functional Gastrointestinal Disorders, Rome IV version (QPGS-IV) in children.
Methods
A prospective cohort study was conducted in a public school in Cali, Colombia. Children and adolescents between 11 and 18 years of age were given the self-report Spanish version of the QPGS-IV at day 0 (baseline) and at day 2 (48 hours later).
Results
The study protocol was completed by 215 children, of which 97 (45%) were excluded from analysis due to the inability to follow the questionnaire’s instructions. The final analysis included data of 118 children (mean age 15.0 ± SD 1.8 years old, 58.5% boys). The most common diagnoses were functional dyspepsia, functional constipation, and irritable bowel syndrome. We found a moderate intra-rater reliability (κ = 0.61-0.65) for diagnosing an FGID in general, a functional abdominal pain disorder, and the diagnosis of functional dyspepsia. We found a weak intra-rater reliability (κ = 0.46-0.54) for diagnosing a functional defecation disorder, functional constipation, irritable bowel syndrome, and the postprandial distress syndrome subtype of functional dyspepsia.
Conclusions
Our study shows that a large proportion of children cannot adequately complete the QPGS-IV and that the intra-rater reliability among those who did adequately follow the instructions is moderate. We advise to test the children’s understanding of the instructions prior to completion of questionnaires and recommend to not rely exclusively on a self-reported questionnaire to select, recruit, or evaluate pediatric patients for FGIDs for research purposes.
Keywords: Child; Functional gastrointestinal disorders; Prevalence; Test-retest reliability

Functional gastrointestinal disorders (FGIDs) are common clinical entities in children and adolescents.1,2 There are no biological markers for FGIDs, and diagnosis relies on symptom-based criteria. In children older than 10 years of age, the Rome IV committee recommends self-report of symptoms to establish diagnosis and to assess the outcomes in clinical trials (patient-reported-outcome).3 The Questionnaire on Pediatric Functional Gastrointestinal Disorders, Rome IV version (QPGS-IV) was adapted from the Questionnaire on Pediatric Gastrointestinal Symptoms by Walker et al4 to facilitate diagnoses. The QPGS-IV has been used to estimate the prevalence of FGIDs in multiple studies in children.1,5 Studies comparing the prevalence of FGIDs in children using the Rome III and Rome IV criteria have shown differences in prevalence predominantly in abdominal migraine, irritable bowel syndrome (IBS), and functional dyspepsia.1,2 It is important to understand if those differences resulted from modifications of the Rome criteria or innate errors in measures. The results of all previous epidemiological studies were based on a single time survey per each respondent.1,2 Relying on a one-time self-report measure does not account for the reliability or validity of the instrument nor the ability of the respondent to complete the survey. Therefore, we cannot definitively establish if a repeated measure could have resulted in a different response. This is particularly important in children, who may have poor recall of symptoms, limited understanding of questions or lose interest and get distracted during the completion of the survey. A common measure of reliability is the intra-rater reliability (consistency), in which the same subject is given the same measure on more than one occasion (test-retest-reliability). The objective of our study is to examine the intra-rater reliability for the diagnosis of an FGID in children and adolescents. In addition, we examined the intra-rater reliability for 2 major diagnostic groups and explored the intra-rater reliability for individual FGIDs.

We conducted a prospective school-based cohort study evaluating the intra-rater reliability of an FGID diagnoses as measured by the QPGS-IV at a public school in Cali, Colombia. A Spanish version of the QPGS-IV was already available to us, as we translated the questionnaire for a previous study according to the guidelines of the Rome foundation for translation and localization.1,6 In short, 2 bilingual physicians provided reverse translation of the questionnaire. After initial translation, the questionnaire was adapted by a randomly selected focus group of 20 clinic patients from Cali with an equal division between sexes and with ages ranging from 8 to 18 years of age. The adapted version was then translated back into English and a member of the research team who was not involved in the translation reviewed the final version to assure fidelity with the original English version of the QPGS-IV. Informative material, a questionnaire covering the child’s medical history, and consent and assent forms were sent to the homes of schoolchildren/adolescents between 11 and 18 years of age. The need for the second questionnaire was explained to the families in accordance with the aim of our study; we explained that we wanted to investigate if the children answered similarly 2 days apart. Children with reported organic gastrointestinal disorders (eg, gastritis, inflammatory bowel disease, and Hirschsprung disease), gastrointestinal complaints that could mimic FGIDs by causing abdominal pain, or comorbid painful conditions frequently associated with FGIDs were excluded. Children of families that were eligible and consented, completed the self-report Spanish version of the QPGS-IV in class on day 0 (baseline) and on day 2 (48 hours later). After completion of both questionnaires, children who did not follow instructions on the questionnaire due to misunderstanding of instructions, inappropriate reading comprehension, or not paying attention to the instructions, were excluded from analyses. Sections of the questionnaire instructed in bold letters that a specific answer to a previous question should prompt to skip a specific section. Children who failed to follow those instructions were considered unable to complete the questionnaire accurately.

In each classroom and for each administration, 2 members of our research team distributed self-report paper surveys. Parents were not present in the classroom. The researchers provided instructions on completion of the survey without disclosing the objective of the study and repeated this again after 48 hours. As the accuracy of recall of symptoms of children has been questioned,7,8 we chose a short interval between survey administrations to facilitate that the content of the responses would not change, as questions had a 30-day reference period. On the other hand, the interval was considered long enough to decrease the likelihood that a child would automatically repeat the answers on the second administration based on their recall of recent answers.

The questionnaires were reviewed to assess prevalence of FGIDs and the intra-rater reliability of the diagnoses. The intra-rater reliability was analyzed for the presence of an FGID in general, for the presence of an FGID in one of the major diagnostic groups (functional abdominal pain disorders and functional defecation disorder), and for individual FGID diagnoses. The intra-rater reliability was not analyzed when less than 5.0% of the children were diagnosed with one particular disorder due to difficulties in interpreting the reliability measurements. With a high percentage of responses falling into a single nominal category (in this case “no”) the percentage of agreement is by definition high and so is the expected/chance agreement (resulting in possible low kappa values which may not necessarily reflect low rates of overall agreement).9

The statistical analysis included measurements of central tendency (average, standard deviation, and percentage) and measurements reflecting the intra-rater reliability. The percentages of agreement and the coefficient of Cohen’s kappa (κ) including 95% confidence intervals were calculated. Kappa values for agreement were interpreted according to the following magnitude guidelines: 0.00-0.20 (none), 0.21-0.39 (minimal), 0.40-0.59 (weak), 0.60-0.79 (moderate), 0.80-0.90 (strong), and > 0.90 (almost perfect).10

Sample size was calculated by using the previously reported prevalence rate for an FGID diagnosis of 21.2%.1 Preliminary outcomes of intra-rater reliability within a 2-week interval by van Tilburg et al11 showed chance-corrected agreements mostly in the range of 0.64-0.78. Because of our shorter time-interval we expected an average agreement rate of around 75.0%. The minimum acceptable level of agreement was set at 40.0%. In according with guidelines on the minimum sample size requirements for kappa agreement test we used a two-tailed test with 80.0% power at α = 0.05 for kappa statistics and calculated that a sample size of 53 subjects was needed to establish agreement between 2 ratings for the presence of an FGID diagnoses in general.12 The sample size needed to measure the intra-rater reliability of the 2 largest diagnostic subgroups based on their reported prevalence (functional abdominal pain disorders 8.2% and functional defecation disorders 10.8%) was 117 subjects. As we did not know how many children were to be excluded, we oversampled to obtain enough data. Sample sizes calculations for the subgroup of nausea and vomiting disorders, and individual FGIDs exceeded our possible study sample.

The study was approved by school’s teachers and principal and by the local Institutional Review Board (No. 024-2019). 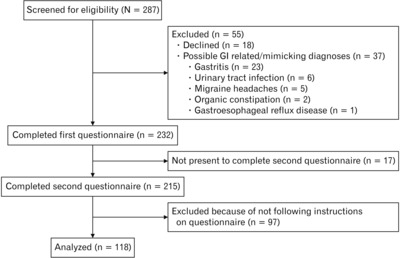 Table 1 . Prevalence of Functional Gastrointestinal Disorders Based on Rome IV Criteria on Day 0 and Day 2

If the results of pediatric studies do not reach perfect agreement, even when parents are included, a question could be raised about whether the absence of perfect reliability is exclusively inherent to the pediatric Rome criteria or to the Rome criteria in general. A comparison with adult literature can help solve this conundrum. Palsson et al15 assessed the intra-rater reliability of the adult Rome IV criteria as measured by the Rome IV Diagnostic Questionnaire at baseline and 20-40 days follow up in 140 adults. Compared to Palsson et al,15 we found a higher reliability in diagnosing children with functional dyspepsia (κ = 0.65 vs κ = 0.53), and similar reliability in diagnosing children with IBS (κ = 0.54 vs κ = 0.51), and functional constipation (κ = 0.46 vs κ = 0.44). This implies that the limitations in reliability are not limited to the pediatric population.

Strengths of our study include the novelty of the study, the high participation rate (93.7%), the low dropout rate (12.6%), and the assessment of adequate completion of the questionnaire, an aspect that has not been previously studied in children completing questionnaires using the Rome criteria. However, multiple limitations should be considered. First, this study included children within a specific age range (11-18 years) located in 1 public school in Cali, Colombia, and the questionnaire was translated into a Spanish version. Therefore, the results cannot be generalized to all age groups, languages, or other geographic areas. Second, supplementary investigations for organic disease were not performed, and some of the diagnoses, therefore, may be inaccurate. Third, we used the exact same questionnaire to evaluate intra-rater reliability and a relatively short interval (48 hours), by this, some children may have remembered what they filled out the first time, which may have falsely increased our found levels of agreement. Fourth, we did not exclude children with 2 FGIDs from analysis (overlap) which may have caused an overestimation of the agreement in diagnosing an FGID in general. However, excluding those children would have underestimated the diagnosis of an FGID in general and could have resulted in inaccurate reliability outcomes for our other measures. Lastly, the current reported reliability outcomes of individual diagnosis have to be interpreted with caution and should be considered preliminary. However, the inclusion of these data may be valuable for the conceptualization of the problem and to guide sample size calculations in future studies.

In conclusion, our study shows that the child-reported Spanish version of the QPGS-IV in a Colombian population has a moderate intra-rater reliability for an FGID diagnosis in general. We recommend not relying on this questionnaire exclusively to select, recruit, or evaluate children for research purposes. In addition, we advise to provide a thorough explanation of the questionnaire, and possibly use mock questions to assure the understanding of the questions. Larger studies are needed to investigate the accuracy, as well as the reliability and validity of the pediatric Rome IV criteria, to assess the reliability of low-prevalent diagnoses, and to compare with previous versions of the Rome criteria.