Abstract
Background/Aims
Incorporation of complementary and provocative test swallows to the high-resolution manometry (HRM) protocol offers potential to address limitations posed by HRM protocols that involve only a single swallow type. The aim of this study is to describe normal findings of a comprehensive HRM testing protocol performed on healthy asymptomatic volunteers.
Methods
Thirty healthy asymptomatic volunteers completed HRM with 5-mL liquid swallows in the supine position. They also completed 5-mL liquid swallows in the upright position, viscous swallows, solid test swallows, multiple rapid swallows, and a rapid drink challenge. HRM studies were analyzed via Chicago classification version 3.0.
Results
The median (5th-95th percentiles) for integrated relaxation pressure (IRP) on supine swallows was 11 (4-16) mmHg; IRP was lower than supine on upright liquid 9 (0-17) mmHg, viscous 6 (0-15) mmHg, solid 9 (1-19) mmHg, multiple rapid swallows 3 (0-12) mmHg, and rapid drink challenge 5 (–3-12) mmHg; P < 0.005. While an “elevated” IRP value was observed on 1 to 2 test maneuvers in 8/30 (27%) subjects, all 30 subjects had an IRP value < 12 mmHg on at least one of the test maneuvers.
Conclusions
Normal values and findings from a comprehensive HRM testing protocol are reported based on evaluation of 30 healthy asymptomatic volunteers. Isolated “abnormalities” of IRP and contractile parameters were observed in the majority (80%) of these asymptomatic subjects, while all subjects also had normal features observed. Thus, the definition of “normal” should be recalibrated to focus on the entirety of the study and not individual metrics.
Keywords: Manometry; Peristalsis; Reference values; Volunteers

High-resolution manometry (HRM) is the primary method utilized in clinical practice to assess esophageal motility during the clinical evaluation of patients presenting with dysphagia, non-cardiac chest pain, and other esophageal symptoms when upper gastrointestinal endoscopy does not reveal an objective diagnosis.1 The Chicago classification of esophageal motility disorders utilizes parameters generated from ten 5-mL liquid test swallows performed in the supine position to categorize HRM findings into motility diagnoses.2,3 While the Chicago classification and its objective parameters of esophageal function reflects the common method to describe HRM studies and classify primary esophageal motility disorders using a standardized terminology, it is not without limitations. The Chicago classification may not adequately identify all abnormalities and also can sometimes yield false positive diagnoses. The classification of esophagogastric junction (EGJ) outflow obstruction is the primary example of the latter scenario in which the classification based on an integrated relaxation pressure (IRP) elevation among supine liquid test swallows may not consistently be clinically relevant.4-6

The Chicago classification presently is based upon a protocol of small-volume liquid swallows performed single position. This testing protocol may not be sufficient to detect all clinically relevant abnormalities, nor clarify when potential abnormal findings are spurious. Thus, incorporation of additional maneuvers into the manometric protocol, such as upright swallows, multiple rapid swallows (MRS), and a rapid drink challenge (RDC), offers the potential to improve the diagnostic yield of esophageal manometry.6-12 Establishing normal values related to these maneuvers is a necessary component to provide a comparative basis with patients undergoing clinical or research evaluation with HRM. Thus, the aim of this study is to report on parameters from adjunctive and provocative HRM maneuvers in asymptomatic volunteers.

Healthy, asymptomatic (ie, free of esophageal symptoms including dysphagia, heartburn, and chest pain), adult volunteers were enrolled and completed between January 2017 and October 2019. Potential subjects were excluded for any previous diagnosis of esophageal, autoimmune, or eating disorders. Subjects were also excluded for use of antacids or proton pump inhibitors, body mass index > 30 kg/m2, or a history of tobacco use or alcohol abuse. All subjects completed validated patient-reported outcomes including the brief esophageal dysphagia questionnaire (BEDQ), gastroesophageal reflux disease questionnaire (GERDQ), and esophageal hypervigilance and anxiety scale (EHAS),13-15 sedated upper endoscopy with functional luminal imaging probe, high-resolution impedance manometry, and 24-hour pH-impedance testing. The HRM parameters were the focus of this report.

The study protocol was approved by the Northwestern University Institutional Review Board (STU00096856). Informed consent was obtained from all controls, who were paid for their participation. A portion of this cohort (20/30 subjects) was previously described.16

Patients fasted for a minimum of 6 hours prior to completing HRM. The HRM studies used a 4.2-mm outer diameter solid-state assembly with 36 circumferential pressure sensors at 1-cm intervals and 18 impedance segments at 2-cm intervals (Medtronic, Shoreview, MN, USA). The HRM device was placed transnasally to record from the hypopharynx to the stomach with approximately 3 intragastric pressure sensors. 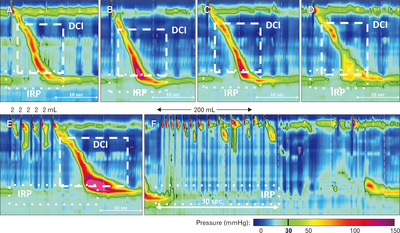 During the baseline (resting) recording in the supine position, the intragastric pressure, EGJ morphology, basal EGJ pressure at end-expiration and end-inspiration, and the EGJ-contractile integral (EGJ-CI) were assessed.3,21 The EGJ-CI was measured by setting the isobaric contour to 2 mmHg greater than the intragastric pressure then using the smart-mouse tool to measure the contractile integral over 3 respiratory cycles (then divided by the time of the measurement: thus into units of mmHg·cm).22

During MRS, the IRP was calculated over the entire duration of the sequence and MRS-DCI and MRS-swallow type were classified based on the peristaltic sequence following the final swallow (Fig. 1).8,10 The MRS contractile augmentation was assessed by taking the MRS-DCI divided by the median-upright DCI. Contractile inhibition was also assessed during MRS and classified as “intact” when no contraction during the MRS sequence, or impaired when a contraction (DCI > 100 mmHg and > 2 cm in axial length) occurred during the MRS sequence.

Presence of panesophageal pressurization, defined as continuous pressurization from the upper esophageal sphincter to the EGJ at an isobaric contour of 30 mmHg was also assessed during MRS and RDC.

On supine 5 mL liquid swallows, the median (5th-95th) supine IRP was 11 (4-16) mmHg (Table 1). Esophageal motility classification was normal esophageal motility in 26 (87%), ineffective esophageal motility (IEM) in 2 (7%), and EGJ outflow obstruction in 2 (7%). EGJ outflow obstruction subjects had median supine IRP values of 16 mmHg and 17 mmHg and both had normal peristalsis. The 2 subjects with IEM had 8/10 and 10/10 ineffective swallows and median DCI values of 760 and 194 mmHg·cm·sec, respectively. There were 2 subjects that each had 1 hypercontractile swallow among the 10 supine swallows; there were no premature swallows observed. 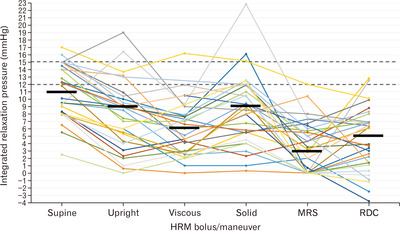 Figure 2. Integrated relaxation pressure (IRP) values by manometric test swallow/maneuver. Each line represents one asymptomatic volunteer. Common thresholds of 12 mmHg and 15 mmHg are reflected by the dashed horizontal lines. Median values for each swallow type or maneuver are represented by a solid horizontal line. The rapid drink challenge (RDC)-IRP value reflects the IRP measured during the first 30 seconds of the RDC (“RDC-IRP-30s”). HRM, high-resolution manometry; MRS, multiple rapid swallows. Figure used with permission from the Esophageal Center at Northwestern.

Findings potentially considered as “abnormal” were observed during the various test swallows and maneuvers among 24 of these 30 (80%) asymptomatic volunteers (Table 2). Conversely, all 30 subjects had an IRP < 12 mmHg on at least 1 of the test maneuvers (Fig. 2) and 29/30 (97%) subjects had normal motility (> 50% effective swallows) on either supine, upright, or viscous swallows.

We evaluated 30 healthy asymptomatic volunteers with HRM and a testing protocol that included supine liquid swallows, upright liquid swallows, viscous swallows, single solid test swallows, MRS, and RDC. The normal values derived from this cohort provide comparison for clinical application to patients tested with comprehensive HRM protocols. Additionally, we observed findings that could be considered “abnormal” in 70% of these healthy asymptomatic volunteers; however these were generally isolated findings and otherwise normal findings were observed on other portions of the testing protocols.

Various factors related to the manometric test protocol contribute to the quantifiable objective parameters that are associated with esophageal motility evaluation with HRM: these include bolus consistency, bolus volume, subject position, and manufacturer of HRM assembly.23 Thus, consistency in HRM study protocol and appropriate application of normal values derived from similar testing situations are important for clinical utilization. The present study evaluated multiple components that could be incorporated into a comprehensive HRM testing protocol and observed fairly consistent parameters as those reported with previous studies of asymptomatic volunteers.8,10,11,21,23-28

Incorporation of the provocative maneuvers the MRS and RDC have recently gained additional interest for clinical manometric evaluation of both gastroesophageal reflux disease and obstructive esophageal disorders.8,9,17,18,20,27-29 The present study supports the IRP threshold of 12 mmHg reported in several studies assessing the RDC.10,11 The present study also observed that similar methods to measure IRP during RDC resulted in similar output; thus application of the IRP-window over the initial 30 seconds of the RDC may provide an acceptable balance of accuracy with ease of application. The MRS has generally been utilized to assess for contractile reserve and was observed with a similar prevalence of contractile reserve in the present study compared with previous studies (70-80% of healthy controls).9,30 Assessment of LES relaxation during MRS using the IRP may also be of clinical utility and the upper limit of normal of 12 mmHg reported in this study is the same as reported in another study.30 The MRS has also been applied to assess contractile inhibition during MRS, observed, however in 20% of this asymptomatic cohort and 2/18 healthy controls (11%) in a previous study.31

The IRP garners particular attention given the importance placed on it as the initial decision point within the hierarchical Chicago classification scheme, primarily the 15 mmHg threshold when using supine 5 mL swallows with a Sierra-vintage HRM assembly.3 The 12 mmHg threshold has been previous applied with upright liquid swallows with clinical relevance.5,6 While the upright IRP was lower than supine swallows for the majority of subjects in this study as expected similar to previous studies,23,24 the upper limit of the upright IRP observed here was driven primarily by 2 outlying values (Fig. 2): one was likely related to a small reducible hiatal hernia that was not appreciated endoscopically (type II EGJ morphology); an explanation for the other can be speculated as potential catheter impingement artifact generated by the position change.32 When incorporating all of the numerous test swallows/maneuvers included in this testing protocol (ie, supine, upright, viscous, solid, MRS, and RDC) there were 8/30 (27%) asymptomatic healthy subjects with an IRP value that would be considered elevated based on previously applied thresholds of 15 mmHg (supine swallows) or 12 mmHg (upright liquid swallows or RDC) (Table 2).3,10,11,24 However, the intra-individual fluctuation of IRP values between these various maneuvers (Fig. 2) demonstrated that elevated IRP values were generally isolated to a single test scenario (only 2 subjects had IRP values greater than previously applied thresholds on more than 1 bolus type/maneuver). Similarly, while contractile abnormalities (particular > 50% ineffective swallows suggesting “IEM”) were observed, all but 1 subject demonstrated effective peristalsis during at least 1 of the test maneuvers.

While this study describes 30 well-characterized asymptomatic volunteers with a comprehensive HRM protocol, it does carry some limitations. As is common among studies assessing healthy asymptomatic volunteers, the cohort evaluated was relatively young and thus changes in esophageal motility that are associated with the normal aging process may not be reflected by this cohort. Additionally, while a comprehensive HRM test protocol was assessed, there are other promising HRM maneuvers, such as the solid test meal, that were not incorporated into this study’s protocol.11,33 Additionally, parameters that incorporate impedance (high-resolution impedance manometry) may also offer benefit to the HRM evaluation, however, assessing combined manometry-impedance measures was not the focus of this evaluation.

In summary, HRM parameters of healthy, asymptomatic volunteers associated with supine liquid swallows (the current standard Chicago classification protocol), as well as upright liquid swallows, viscous swallows, solid test swallows, MRS, and RDC were described. These values provide a reference for comparison for clinical application of symptomatic patients. Additionally, it should be noted that isolated “abnormalities” of both IRP and contractile parameters were observed in the majority of these healthy asymptomatic controls. This demonstrates that as the HRM protocol expands to include numerous additional maneuvers, caution needs to be exercised when interpreting the clinical relevance of isolated “abnormalities.” Instead, consistently abnormal findings across multiple test maneuvers should be present to support clinically-relevant esophageal motility abnormalities; future studies of patients to support this approach remain necessary.

Note: To access the supplementary figure mentioned in this article, visit the online version of at http://www.jnmjournal.org/, and at https://doi.org/10.5056/jnm20118.