TO THE EDITOR: There are 2 major roles attributed to interstitial cells of Cajal (ICC): (1) providing pacemaker activity to smooth muscle and (2) transmission of neural inputs to smooth muscle.1 Therefore, ICC together with neuron and smooth muscle cells constitute the phasic contractile activity and propagation within smooth muscle layers. This activity likes an orchestra by 3 type of cells, synchronizing the periodic rhythmicity.

The underlying synchronization is intercellular communication by which ICC bridging an action from neuron to smooth muscle, and transducing the mechanosensitivity from smooth muscle to neuron ie, regulates or alternates the excitation and relaxation. A study published in entitled “Transient receptor potential canonical 4 and 5 channel antagonist ML204 depolarized pacemaker potentials of interstitial cells of Cajal” by Lee et al2 reveals that such rhythmicity is regulated through transient receptor potential canonical (TRPC) 4/5 channel operated Ca oscillation or mobilization to set up pacemaker potential in ICC.

There are several new findings in this study: (1) TRPC4 expression assayed by reverse transcription polymerase chain reaction suggests it is one of ICC properties as shown in Figure 1. (2) The rhythmically spontaneous intracellular calcium ions [Ca2+]i oscillations frequency is regulated by TRPC4/5 blocker as seen in Figure 2A, indicating one of the targets onto pacemaker activity. (3) Any ionic conductance through either non-selective cation channels (NSCC) or Ca2+-activated Cl- channels for pacemaker activity must be driven by [Ca2+]i oscillation. None of the selective channel inhibitors are capable of direct blockage of the channel or ionic conductance. The fact is that all these inhibitors altering pacemaker activities are due to their changing membrane potential of ICC. As seen in Figure 2B, anoctamin did not abolish the pacemaker activity, and the other inhibitors respectively targeting on NSCC, anoctamin 1, ether-a-go-go–related gene potassium channel, and TRPC4 channel are because of their depolarizing membrane potential.3-6 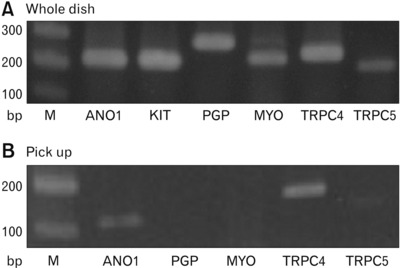 Figure 1. Transient Receptor Potential Canonical 4 and 5 (TRPC4/5) mRNA expression was obtained respectively from heterogeneous muscle layer dissociated cells and single interstitial cells of Cajal (ICC). (A) Heterogeneous muscle layer dissociated cells were mainly included neurons, smooth muscles, and ICC that were made in primary culture. Reverse transcription polymerase chain reaction (RT-PCR) screened the markers of neuron by proton gene product 9.5 (PGP), muscle by myosin (MYO), ICC by anoctamin 1 (ANO1), and c-Kit. Note that those markers are all strongly expressed in corresponding sizes, and TRPC4 strongly whilst TRPC5 weakly displayed. (B) Single ICC picked up by patch pipette suction was screened by RT-PCR. Obviously, there is only ANO1 expressed, whilst there is no dimer in either neuron or muscle cells. TRPC4 transcript here can be only associated with ICC. Adapted from Lee et al.2 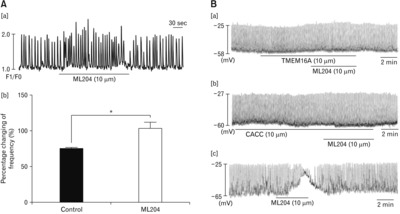 Figure 2. Transient Receptor Potential Canonical 4 (TRPC4) functional expression in interstitial cells of Cajal (ICC) was examined respectively by calcium (Ca)-imaging and pacemaker activity. (A) ICC intracellular Ca2+ [Ca2+]i imaging was loaded with Fluo-4 acetoxymethyl ester that displayed the spontaneously biophysical oscillation, and the oscillating frequency was increased by TRPC4 inhibitor (ML204). [a] A trace of the spontaneous [Ca2+]i oscillations before and after application of ML204. In general, all activity of the trace was featured with rhythmicity, consistent to the pacemaker activity in ICC. Here, TRPC4 inhibitor obviously elevated the baseline concentration and increased Ca oscillation frequency. F1/F0, relative alterations of [Ca2+]i fluorescence emission. [b] Histogram summarizes the frequency that was about 25% increased due to ML204 application. Bars represent mean ± SE values (n = 6 per group). * < 0.05. (B) ICC pacemaker activity recorded from patch clamp was not obviously affected anoctamin 1 (ANO1) blocker or Ca2+-activated Cl- channel (CACC) blocker, but those blockers can prevent the effect from ML204 that greatly depolarize the membrane potential and consequently decreased pacemaker activity. [a] A trace recorded from a single ICC exhibiting pacemaker activity was not inhibited by transmembrane member 16A (TMEM16A), a specific blocker (ANO1). Addition of ML204 in presence of TMEM16A did not change as much as it is compared to [c] alone. [b] Similar effect of TMEM16A from CACC also did not change the pacemaker activity but prevented the depolarization from M204. [c] ML204 10 μM drastically depolarized the membrane potential and inhibited pacemaker activity but it was reversible after washing out. Adapted from Lee et al.2

Lee et al2 examined TRPC4 in ICC by mRNA transcripts, Ca fluorescent imaging and electrophysiological assays. They demonstrated that TRPC4 channel is one of properties in ICC and actively participated in pacemaker activity by possibly different mechanisms, in which TRPC4 in ICC controls of intracellular Ca concentration, or balances the dynamic processes of neurotransmitter and mechanosensitivity in setting up membrane potential or initiating the excitability of the ICC. Therefore, regulation of the second messenger system through TRPC4 is highly susceptible in modulating ICC pacemakers, therefore, the TRPC4 channel is a target for control of gastrointestinal motility.

This work was supported by The first Batch of Qihuang High-level Talent Team Training Projects of Guangxi University of Chinese Medicine (Award No. 2018001).

Zengzi Zhou and Meng Xia are equal in writing manuscript, and Jianlin Lv oversights the study and ervising.