In the clinical setting, belching disorder (BD) is easily distinguished from gastroesophageal reflux disease (GERD) with belching because the sole complaint in patients with BD is typically bothersome excessive belching, sufficient to impact daily activities and impair social functioning (eg, social isolation and onset of anxiety disorder).1 Belches in patients with BD are usually supragastric, caused by intake of air from the pharynx to the esophagus, followed by rapid expulsion of the air. In contrast, physiologic gastric belching (GB) is induced by a vagal reflex (ie, transient lower esophageal sphincter relaxation [TLESR]).2 Supragastric belching (SGB) is often excessive and impacts affected patients’ social lives; however, it is regarded as a behavioral disorder. For example, SGB spells may be frequent when affected patients consult their physicians. Notably, belching is also a frequently reported symptom in patients with GERD.3 In this group, GB is typical; however, SGB may also occur and is reported by half of patients with reflux symptoms.4,5

This study investigates and compares the characteristics of belching (ie, SGB and GB) in association with GER in patients with BD and patients who had GERD with belching.

Ten patients with BD and 10 patients with typical GERD symptoms as the main concern and belching, were randomly selected and their clinical data were retrospectively evaluated. All patients had undergone 24-hour multichannel intraluminal impedance and pH (MII-pH) monitoring, as well as high-resolution manometry, at Soonchunhyang University Hospital (Seoul, Republic of Korea) during the past 5 years. All patients with BD met the Rome IV criteria (B2a: excessive SGB) and all patients with GERD had typical symptoms (eg, heartburn and/or regurgitation) as the main symptom.1 Exclusion criteria were incomplete medical records, MII-pH monitoring performed on proton pump inhibitor therapy, previous gastrointestinal tract surgery, and < 5 belching events on diary during impedance pH monitoring. The study protocol was approved by the Institutional Review Board of Soonchunhyang University Seoul Hospital (2020-01-016).

All patients fasted from midnight until the time of measurement. A combined pH-impedance catheter (Sandhill Scientific, Inc, Highlands Ranch, CO, USA) was placed transnasally such that the esophageal pH electrode was situated 5 cm above the upper margin of the manometrically defined lower esophageal sphincter (LES). The catheter’s 8 electrode rings enabled impedance recording at 6 segments (3, 5, 7, 9, 15, and 17 cm) above the LES. All patients had discontinued proton pump inhibitor use for at least 7 days previously; they had also discontinued other medications that may affect gastrointestinal motility or acidity for at least 72 hours previously. Otherwise, patients were encouraged to maintain their normal daily activities and usual diet. Event markers on the data logger were used to record the start and end times of symptoms (only start time for belching), meal times, and position changes. The recorded data were analyzed using a dedicated software program (BioView Analysis; Sandhill Scientific, Inc), in conjunction with visual analysis using an appropriate time window and zooming.6

Twenty-four hour MII-pH monitoring data were retrospectively analyzed by 2 gastroenterology physicians employed at Soonchunhyang University Hospital. SGB was defined as a rapid rise in impedance (≥ 1000 Ω) moving in an aboral direction, followed by a return to baseline moving in the oral direction.8 GB was defined as an elevation of intraluminal impedance (≥ 1000 Ω), including pure gas and mixed liquid gas reflux episodes moving in the oral direction and reaching the most proximal impedance recording segment (Fig. 1).8 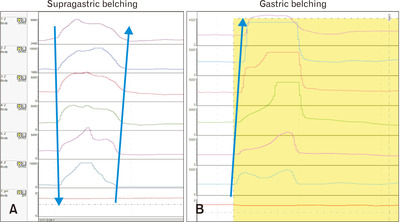 Reflux parameters determined by MII-pH monitoring were compared between patients with BD and patients who exhibited GERD with belching. Parameters of interest were as follows: esophageal acid exposure % time, rate of acidic bolus exposure time, and symptom index > 50%.10 Esophageal acid exposure % time was defined as the percentage of total time pH was < 4.0 units divided by the time monitored. Bolus exposure time was defined as the time from liquid bolus entry (50% down in baseline impedance) to exit (returning to entry level for ≥ 5 seconds). High-resolution manometry parameters, including hyper-dynamic upper esophageal sphincter (UES) pressure, hyperdynamic UES,11 LES pressure, and integrated relaxation pressure, were also compared between the 2 groups of patients.

Other comparisons between patients with BD and patients who exhibited GERD with belching were total belching/SGB/GB, the SGB/GB ratio, the PB/DPB/DIB/FB/IB ratio of SGB, and the ratio of acidic/non-acidic SGB/GB. Correlations between GB or SGB and the reflux parameters measured by MII-pH monitoring were also determined in the 2 groups.

Characteristics of the Patients

Table. Characteristics of the Patients 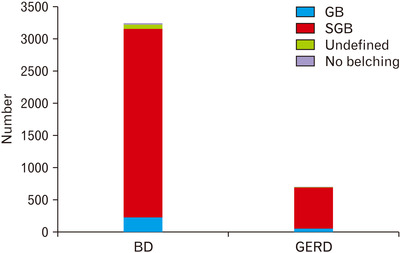 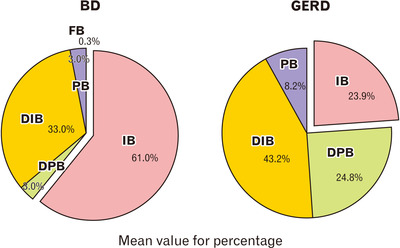 Acidity of Supragastric and Gastric Belching 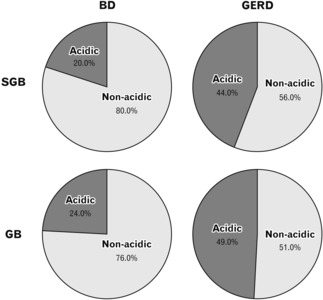 Our study showed that belching was more frequent in the BD group than in the GERD group, as expected; however, the SGB/GB ratio did not differ between the 2 groups. In our patients, SGB was more common than GB in patients with GERD who exhibited belching. However, this finding should be interpreted with caution because patients are more likely to regard SGB as a symptom, rather than GB; we included patients with GERD who reported > 5 belches per day in their MII-pH symptom diary. In our study, the GERD group represent somewhat high number of belches (median 56.0). This phenomenon may also be due to our exclusion criteria which exclude GERD patients who reported < 5 belching events during monitoring.

SGB is provoked by 2 mechanisms,2 most commonly involving the air suction mechanism. An initial abrupt contraction of the skeletal diaphragm induces negative pressure in the esophageal lumen. When the glottis is closed, UES relaxation occurs during deep inspiration; subsequently, atmospheric air is sucked into the negatively pressured esophagus. This rapid inflow of air is immediately expelled through UES relaxation, concomitant with elevated intrathoracic pressure that occurs as a result of abdominal straining.2,4 At the esophagogastric junction, the elevated pressure is followed by relaxation, which is induced by abrupt esophageal distension. This may explain why SGB leads to GER. Generally, the UES is relaxed during TLESR,17 allowing the air suction type of SGB to occur during the reflux period, as frequently observed in our patients with GERD. The other (much less common) mechanism of SGB comprises air injection, in which air is pushed into the esophagus by the elevated pharyngeal pressure that occurs after voluntary contraction of the tongue base.2

Several studies regarding the effect of proton pump inhibitor therapy on belching in patients with GERD have shown that belching events are refractory to such drugs.15 DIB in our study is expected to respond well to the proton pump inhibitors usually prescribed for GERD; IB, PB, and DPB seems to be less responsive. Baclofen, a γ-aminobutyric acid type B receptor agonist, causes a slight elevation in LES pressure, thus reducing the numbers of both TLESRs and acid reflux episodes.20-22 It may therefore aid in reduction of SGB, including IB, PB, and DPB, by reducing diaphragmatic contraction and inhibiting TLESR. Diaphragmatic breathing23,24 and speech therapy25 may also contribute to reductions of all types of SGB, through inhibition of the pathophysiologic mechanism underlying SGB.

Our study had several limitations. First, it used a retrospective design, such that the BD and GERD groups were defined based on chart and exam reviews. Second, the numbers of patients with BD and those with GERD were low because BD is rare. Studies that include a larger number of patients will yield more precise results.

This work was supported by the Soonchunhyang University Research Fund.

Joon Seong Lee conceived the original idea, analyzed raw data from impedance plots, and supervised the project; Shin Ok Jeong analyzed raw data from impedance plots, performed the analytic calculations, and wrote the manuscript; and Tae Hee Lee helped supervise the project and contributed to the interpretation of the results. All authors discussed the results and contributed to the final manuscript.