Patients with dyspepsia complain of early satiety, postprandial fullness, and epigastric pain/soreness, which are symptoms thought to originate from the gastroduodenum. The global prevalence of dyspepsia is reported to be about 20.0%; however, in up to 70.0% of those who complain of dyspepsia there is no known organic cause.1 These patients can be diagnosed with functional dyspepsia (FD) based on the Rome III criteria. The symptoms of FD may be due to multiple factors including visceral hypersensitivity, impaired gastroduodenal motility, autonomic nervous system dysfunction, altered microbiota, altered gut-brain axis, and psychological problems, but the exact mechanism of the symptoms seen in patients with FD is still being investigated. Therefore, no definitive treatment for FD has not yet been established, and instead empirical treatments are widely used; these include acid suppressive drugs, prokinetics, pain modulators, and psychotherapy.2

The empirical treatment agents for FD are prokinetics such as metoclopramide, domperidone, cisapride, tegaserod, and mosapride citrate. In a meta-analysis of 1844 patients with FD, prokinetics gave an approximately 30.0% higher response rate than placebo.3 Furthermore, a recent meta-analysis of 29 trials comparing with placebo found an average percentage symptom improvement of 40.0% in the prokinetic group, compared to 26.1% in the placebo group.4 Prokinetics may improve FD symptoms by affecting gastric accommodation or increasing gastroduodenal contraction, thereby shortening gastric emptying time. Among these prokinetics, mosapride citrate exerts its prokinetic effect by releasing acetylcholine through selectively activating 5-hytroxytryptamine 4 receptors thereby causing contraction of smooth muscle fibers in the gastroduodenum.5,6 In various experimental and clinical studies, mosapride induced increased gastric emptying and showed efficacy and safety in patients with FD.7,8 Also, the Korean national clinical guidelines for FD recommend mosapride and other prokinetics for patients with FD.9

Eligible patients were male and female adults of ≥ 19 years, with a history of FD symptoms (early satiety, postprandial fullness, epigastric pain, and epigastric soreness) for at least 6 months before screening, sustained over the previous 3 months, without any organic disorders affecting dyspepsia at screening endoscopy (according to the Rome III criteria for FD). Patients had to have at least 1 of the above 4 symptoms of more than moderate severity and at least 3 symptoms of more than moderate severity out of the 10 symptoms: nausea, vomiting, bloating, abdominal cramps, early satiety, acid eructation/heartburn, sickness, loss of appetite, retrosternal discomfort, and epigastric pain.10

This was a multicenter, randomized, double-blind, active-controlled, non-inferiority study performed from December 2016 to April 2017 in 16 Korean referral hospitals (ClinicalTrial.gov Identifier: NCT03024086). It was conducted according to the ethical principles based on the Declaration of Helsinki and good clinical practice, as well as the requirements of the Ministry of Food and Drug Safety.

Table 1 . Method of Administering the Drugs in This Clinical Trial

Follow-up visits during the study period to assess gastrointestinal symptom (GIS) scores, dyspepsia-specific quality of life (QoL), drug compliance, and adverse events were scheduled at weeks 2 and 4 (Fig. 1). Compliance with medication was confirmed at Visit 2 and Visit 4 by patients returning the unused portion of the medication. The compliances with the test medication (or test drug placebo) and control medication (or the placebo of the control medication) were calculated, and the averages of the 2 were taken as the final compliance with medication. Dyspepsia-specific QoL and status were assessed using Nepean Dyspepsia Index-Korean version (NDI-K)11 and the urea breath test, respectively. 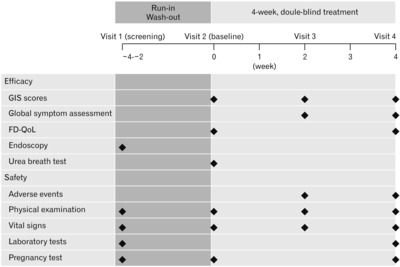 The safety of study drugs and compliance were assessed based on adverse events reported by subjects, physical examination, and laboratory tests, at each institution at weeks 2 and 4 after randomization. Drug compliance was considered good when the compliance was > 80.0% and < 120.0%. The safety set composed of all subjects who took the study drug at least once after randomization and underwent follow-up for safety assessment.

Safety set analysis was performed in all patients who received at least one dose of test drug and had follow-up assessment. Analyses of demographics and baseline characteristics were performed in all patients of each group included in the full analysis set (FAS). Efficacy endpoints were analyzed in the per-protocol set population, defined as the subset of the FAS population excluding those with major protocol violations.

Table 2 . Demographic and Baseline Characteristics of the Subjects 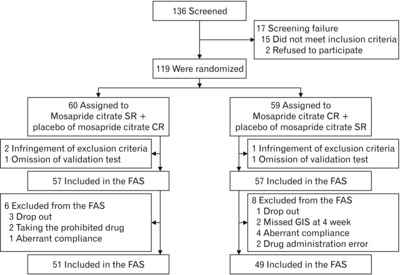 Table 3 . Changes in Gastrointestinal Symptom Scores From Baseline at Week 4 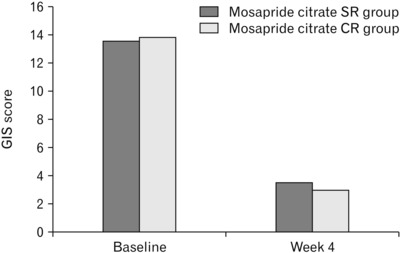 Figure 3. Summary of the primary endpoint (gastrointestinal symptom [GIS] scores at baseline and week 4 in the per-protocol set population).

Table 4 . Changes in Gastrointestinal Symptom Scores From Baseline at Week 2

Table 5 . Changes in Dyspepsia-specific Quality of Life Scores From Baseline at Week 4

The changes in GIS scores from baseline to weeks 2 and week 4 for exploratory efficacy variables according to status (Supplementary Table 2) and FD subtype (Supplementary Table 3) did not differ between the 2 groups. In addition, there were no differences between the 2 groups in terms of changes in GIS scores for the various symptoms, improvement rates in global assessment, and changes in the NDI-K for the total and for each subscale according to status and FD subtype.

In the Korean guidelines for FD, prokinetics like mosapride, a main constituent of mosapride citrate CR, are recommended for managing symptoms in FD patients.9 Mosapride citrate CR is currently used in many patients with various dyspeptic symptoms as well as in FD. Mosapride has also been proven to be effective and safe in previous clinical studies of FD patients. It was more effective in improving FD symptoms than domperidone, the most common comparator prokinetic,19 although there was inconsistency in studies comparing with placebo.20,21 In studies of patients with FD, upper abdominal distension as well as total GIS scores responded much better to mosapride 5 mg 3 times a day than to domperidone 10 mg 3 times a day. Furthermore, mosapride was as effective or more effective than acid-suppressive agents or mucosal protectants. In studies comparing it with a potent acid-suppressive drug, proton pump inhibitor, mosapride showed similar efficacy in FD patients.22,23 In a large-scale randomized clinical trial including more than 600 patients, after 2-week treatment with mosapride or teprenone, more patients preferred mosapride to teprenone.24 However, some investigators have questioned the effectiveness of prokinetics in FD. In a meta-analysis of 13 randomized clinical trials published in 2015, mosapride was reported to be ineffective in FD compared with placebo or other drugs.25 Nonetheless, as the authors concluded, the inconsistency might be due to a variety of factors such as publication bias, lack of consistent diagnostic criteria, and different assessment outcomes.

The present study compared the efficacy of mosapride citrate SR and mosapride citrate CR by analyzing multiple variables including patient-reported global assessments of symptom improvement and dyspepsia-specific QoL as well as GIS scores. In terms of these secondary efficacy variables, there were no differences between the groups. First, our results showed that the change in GIS from baseline to week 2 was not different, suggesting rapid improvement of dyspepsia symptoms in the study patients. Also, the changes in GIS by week 4 were higher than by week 2. Taken together, these findings indicate that mosapride citrate SR was able to improve FD symptoms in a short time, with increased efficacy over a longer period of time. Second, the study patients reported subjective symptom improvement. Patient-reported global symptom also improved similarly by weeks 2 and 4 in both groups. Third, dyspepsia-specific QoL also improved after 4 weeks of mosapride citrate SR and mosapride citrate CR treatment. Previously, it was reported that QoL of FD patients seldom improved in response to prokinetics. In a recent meta-analysis evaluating the effect of several prokinetics on FD patients, only itopride improved QoL compared with placebo.26 However, we found that total scores in NDI-K, as well as scores in each individual area of QoL, increased significantly in both groups by week 4, although they were not compared directly with placebo.

We also conducted subgroup analyses according to infection as well as FD subtypes in view of the fact that the pathophysiology FD involves complex factors including infection, dysmotility, and hypersensitivity to acid or foods. In these subgroup analyses, we again found no significant differences between mosapride citrate SR and mosapride citrate CR groups: outcomes for change in GIS, global symptom improvement rates, and dyspepsia-specific QoL, from baseline to weeks 2 and 4 were similar regardless of infection and subtype of FD. Symptom improvement rate (63.2%) in patients with PDS subtype was higher than that in the whole group (54.9%), as the previous study27 confirmed that mosapride use was more effective in patients with PDS subtype than in EP subtype or overlap subtype patients. All these results indicate that the efficacy of mosapride citrate SR once daily is similar to mosapride citrate CR 3 times a day.

There are some limitations to the present study. First, one of the most important advantages of mosapride citrate SR is a better compliance by avoiding having to take the medication several times a day. However, due to the need for blinding, this advantage could not be demonstrated in the study. Additionally, the present study did not compare the cost-effectiveness of the 2 drugs, although once-daily administration would certainly reduce the cost. Second, since functional tests for gastric motility such as gastric emptying time was not used, we may not have excluded some patients with gastroparesis. To some extent, however, this was avoided by excluding patients who took drugs that could affect gastrointestinal motility, those with organic causes of gastroparesis or uncontrolled diabetes mellitus. Third, there was no placebo group for evaluating the efficacy of the study drugs. Metoclopramide, trimebutine, mosapride, domperidone, and proton pump inhibitors are all known to improve symptoms in patients with FD. Comparisons with other comparators might also be needed to validate the usefulness of mosapride citrate SR. Fourth, the study period was only about one month. However, most previous studies also compared symptom improvement after 4 weeks, although others examined symptom improvement after 1 to 2 or 6 to 8 weeks. Given that there was greater improvement of symptoms after 4 weeks than 2 weeks, it may be necessary to compare symptom improvement rates over longer times. Finally, the number of study patients was relatively small although the number recruited was appropriate after taking into account dropout rates. Numbers of patients were particularly small in the subgroup analyses according to status and FD subtype.

Despite these limitations, this study analyzed the efficacy of mosapride citrate SR in patients with FD in terms of multiple variables, namely GIS score, patient-reported global assessment of symptom improvement, and dyspepsia-specific QoL. In addition to the variety of endpoints, the study has merit in terms of study patients and duration. The enrolled patients had FD symptoms of more than moderate degree and follow-up was for 4 weeks in contrast to previous studies in which some patients had mild symptoms and follow-up was for only 1-2 weeks. In conclusion, mosapride citrate SR once daily for 4 weeks is as effective as mosapride citrate CR 3 times a day in improving GIS in FD patients and has a similar safety profile. It also improves patient-reported global assessments of GIS and dyspepsia-specific QoL and might achieve better compliance than mosapride citrate CR.

Note: To access the supplementary tables mentioned in this article, visit the online version of at http://www.jnmjournal.org/, and at https://doi.org/10.5056/jnm20061.