Abstract
Background/Aims
We evaluated the clinical significance and prognostic power of functional luminal imaging probe (FLIP) panometry in patients with achalasia treated with peroral endoscopic myotomy (POEM), and examined the clinical parameters associated with symptomatic improvement and the presence of contractility (POC) following POEM.
Methods
We reviewed the electronic medical records of patients with achalasia treated with FLIP panometry and POEM at a tertiary teaching hospital in Seoul, Republic of Korea. Follow-up examination was composed of esophageal manometry and questionnaires on symptoms. We analyzed the FLIP data by interpolating using the cubic spline method in MATLAB.
Results
We retrospectively analyzed 33 men and 35 women (mean age: 52 ± 17 years), of whom 14, 39, and 15 patients were diagnosed with achalasia types I, II, and III, respectively. The FLIP panometry diagnoses were reduced esophagogastric junction opening (REO) with a retrograde contractile response (n = 43); REO with an absent contractile response (n = 5); REO with a normal contractile response (n = 11); and a retrograde contractile response (n = 9). Overall, the patients showed improvements in Eckardt scores following POEM from 6.48 ± 2.20 to 1.16 ± 1.15 (P < 0.01). Post-POEM symptomatic improvement was not significantly associated with any of the clinical parameters, including panometry diagnosis. Conversely, post-POEM POC was significantly associated with the presence of repetitive antegrade contractions and achalasia subtypes (both P < 0.01).
Conclusion
While FLIP panometry was not significantly associated with the clinical course of achalasia, FLIP panometry was associated with POC following POEM and may complement manometry in the functional evaluation of esophageal motility disorders.
Keywords: Esophageal achalasia; Manometry; Myotomy

Achalasia is an esophageal motility disorder characterized by the inability of the lower esophageal sphincter (LES) to relax and a lack of esophageal body peristalsis. Treatment methods include medication, endoscopic treatment, and surgical treatment. Among them, peroral endoscopic myotomy (POEM) has become the mainstay of endoscopic treatment for achalasia.1-3 POEM is currently being highlighted as a new treatment.

High-resolution manometry (HRM) based on a spatiotemporal plot can help diagnose esophageal motor disorders; the Chicago classification based on HRM showed a higher diagnostic yield than the previously used conventional criteria based on linear waves.4-7 However, the Chicago classification has its limitations, including inconsistent measurements of the adequacy of the esophagogastric junction (EGJ) with integrated relaxation pressure (IRP).

As research on achalasia has increased, interest in the functional luminal imaging probe (FLIP) has also increased.8-10 The FLIP showed a higher diagnostic yield compared to the previously used IRP in the measurement of the function of EGJ using the EGJ-distensibility index (EGJ-DI).11-13 Moreover, FLIP panometry can mimic secondary peristalsis, and new diagnostic criteria based on panometry showed a better diagnostic yield compared to the Chicago classification.14 However, its usefulness before POEM treatment is yet unproven, except in a small number of cases.15 Moreover, it is unclear which parameters can predict symptomatic improvement and the presence of esophageal peristalsis after POEM treatment.16,17 The aim of this study is to investigate the clinical significance of panometry before POEM and determine the predictive parameters of symptomatic improvement and presence of esophageal peristalsis after POEM.

We reviewed the clinical records of adult patients (age >18 years) with achalasia who had undergone FLIP panometry after induction of general anesthesia and POEM at a tertiary referral center in Seoul, South Korea, from October 2017 to March 2020. The following clinical data were collected: age, sex, HRM, FLIP data, and pre- and post-POEM Eckardt scores. This study was approved by the institutional review board of the treating institute (Approval No. S2019-1634).

POEM was performed by 3 expert endoscopists (H.Y.J., K.D.C., and D.H.K.) while the patient was under general anesthesia. All of the procedures were performed using an upper gastrointestinal endoscope with a plastic cap and carbon dioxide insufflation. Landmarks, such as the LES, gastroesophageal junction, and site of incision in the mid-esophagus, were identified by endoscopy before POEM. After injecting a starch-based or saline solution into the submucosal layer to create a submucosal bleb, a mucosal incision of approximately 3 cm was made using a hook knife (Olympus, Tokyo, Japan) using the dry cut mode at 60 W with effect 5 (ERBE, Tübingen, Germany). Myotomy was performed in the posterior (5 o’clock) position with an insulated-tip knife nano (Olympus, Tokyo, Japan) using the mode at 80 W with effect 7 at the discretion of the endoscopist; the myotomy was intended to be of selective/partial thickness in all of the cases. Following the completion of myotomy, the mucosal incision site was closed with endoclips.3

Manometry sensors were positioned to record data from the terminal portion of the proximal esophageal segment through the distal esophagus and into the proximal stomach. The HRIM assembly was fixed in place by taping it to the patient’s nose. Esophageal HRM was performed before and after POEM. The esophageal HRM protocol included a 30-second interval without swallowing to assess the basal EGJ pressure and morphology, followed by ten 5-mL swallows of normal saline solution in the supine position.18 Manometric data were analyzed using Zvu Advanced GI Diagnostic Software by 1 investigator (K.W.J.).19 Achalasia subtypes were determined based on the Chicago classification. IRP and LES resting pressure data were analyzed. The presence of contractility (POC) using esophageal HRM after POEM was defined by 2 investigators (K.W.J. and L.C.H.) after discussion.16

The FLIP assembly was 240 cm long, with a 16-cm-long cylindrical bag mounted on the distal end of the catheter (EndoFLIP; Crospon, Galway, Ireland). The infinitely compliant bag housed 16 impedance planimetry electrodes spaced at 1-cm intervals and a solid-state pressure transducer positioned at the distal end. Impedance planimetry electrodes were used to generate cross-sectional areas (CSAs), and the intra-bag pressure was extracted from the solid-state pressure transducer.

Patients underwent general anesthesia during endoscopic intervention in the left lateral decubitus position. The FLIP catheter was inserted trans-orally and positioned under the direct endoscopic view, with 1 or 2 sensors placed distal to the EGJ. The proper placement was confirmed based on a visualized hourglass-like shape on the FLIP display; the narrowed area of the hourglass indicated the EGJ. The bag was gradually filled with normal saline from 30 mL to 70 mL with 10-mL intervals, with pauses for approximately 30 seconds to 60 seconds at each volume. FLIP measurements were gathered before POEM during general anesthesia.

Continuous data measured using the FLIP obtained through the 16 sensors were extracted as ASCII files and analyzed using MATLAB (The Math Works, Natick, MA, USA). The customized program for data analysis was used to construct a topography plot based on the ASCII data extracted from each sensor. For better resolution, topography plot data were interpolated with 2-mm accuracy, and volume and pressure changes were displayed to aid in the intuitive understanding of the correlation between topography plots over time. The color in the topography plot indicates the diameter.

Each patient’s FLIP panometry data were evaluated by 2 investigators (K.W.J. and L.C.H.). The contraction that was induced by the distension pattern was evaluated for all patients in the study. Esophageal contractions were defined when an esophageal body diameter decreased by ≥ 5 mm in 2 or more adjacent impedance planimetry channels. 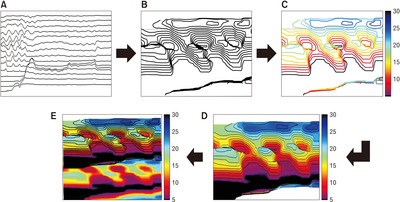 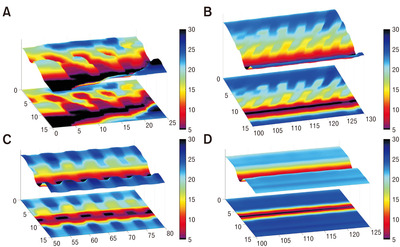 Flip tomography motility classification was based on the study by Carlson et al.8 Reduced EGJ opening (REO) was defined as EGJ-DI < 3.0 mm2/mmHg.

Definition of Presence of Contractility After Peroral Endoscopic Myotomy

A total of 68 patients, including 33 men and 35 women, with a mean age of 52 ± 17 years, who had undergone POEM and had follow-up Eckardt score data were included in the analysis. Table 1 summarizes the patient characteristics at baseline. Table 2 summarizes FLIP topography and the motility classification as per the manometric motility diagnosis. Thirty-six of 68 patients attended follow-up HRM after POEM (Fig. 3). The median follow-up length of HRM and surveys after POEM was 205 days (interquartile range: 25th-75th percentile, 34-304 days).

Table 1 . General Characteristics According to the High-resolution Manometry Motility Diagnosis 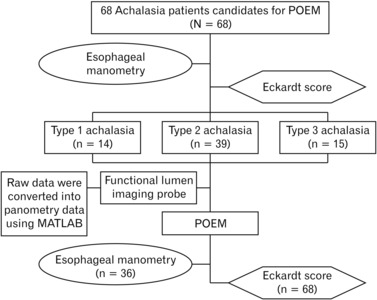 After POEM, FLIP panometry was measured. However, no significant repetitive pattern of contraction was observed.

All of the patients with achalasia who had undergone POEM showed significant symptomatic improvement. POC was significantly higher in those with RAC and achalasia type II.

All manometric subtypes of achalasia in our study showed symptomatic improvement, in line with a previous report by Kim et al.3 In previous studies, achalasia was effectively identified using real-time FLIP panometry to evaluate esophageal motility.8,14,21 However, the predictive value of FLIP panometry had no statistical significance.21 In contrast, our results showed an association with FLIP panometry pattern in the clinical course after POEM in patients with achalasia.

This study had a limitation. We analyzed topography using specialized software, which is not widely available. However, the data and profile obtained from this panometry pattern are technically comparable to those from other studies.8,20

In conclusion, this study demonstrated that the presence of RACs and the panometry pattern have an association with POC after POEM. These parameters may reflect pathogenic features or the degree of neurodegeneration.

Note: To access the supplementary figure mentioned in this article, visit the online version of at http://www.jnmjournal.org/, and at https://doi.org/10.5056/jnm21186.

This study was financially supported by a grant of the Korean Society of Neurogastroenterology and Motility (KSNM-20-02).