TO THE EDITOR: Although the pathophysiology of irritable bowel syndrome (IBS) is multifactorial, visceral hypersensitivity (VH) is of the most importance. The possible underlying mechanism of VH was suggested by a recently published study in the Journal of Neurogastroenterology and Motility entitled “The role of intestinal microbiota and mast cell in a rat model of visceral hypersensitivity” by Li et al.1 The authors showed the association between mast cells and intestinal microbiota in an animal model of VH. In the VH rat model induced by acetic acid enema with partial limb restraint method, mast cell numbers and their degranulation significantly increased compared with the controls. Those increases were reduced by administration of ketotifen or probiotic VSL#3, which restored 1 abundance. The study suggests that IBS could be detected and managed by observing or manipulating mast cells and intestinal microbiota. Therefore, we thought to image mast cells with no need of using conventional methods including immunohistochemistry for either tryptase or c-kit or electron microscopy. We would like to introduce cases of intestinal mast cell images using confocal microscopy without special staining.

This study was approved by the Hanyang University institutional review board (2020-01-033-003) and written informed consents were obtained from the study patients before participation. We obtained intestinal tissues (rectal mucosa) during colonoscopy from patients with diarrhea-predominant IBS who were diagnosed by symptom-based criteria. The rectal mucosa samples were sectioned at 2 mm in thickness, and prepared on 3 slides. The first and the third layers are stained with toluidine blue and with the rabit polyclonal anti-CD117 (A4502; Dako Cytomation, Carpinteria, CA, USA), respectively. And the second layer (sandwiched by 2 stained layers) is applied for the confocal imaging without any staining. The unstained slides were observed by scattering-type confocal microscopy (SCM) after locating where to be able to find mast cells (the same areas with many crypts in each slide). The SCM is a specialized microscopy, where the source of the input light was a cw-mode 532 nm laser, and the output signal from the mast cells was detected using a photomultiplier tube. The images from the output signal were acquired at a frame rate of up to 2 Hz and a resolution of 1024 × 1024 pixels. We observed unstained slides and 2 adjacent slides immunohistochemically stained with either toluidine blue or c-kit (CD 117). We could determine by SCM whether candidate cells have the unique features of the average size and distributional shape of internal granules and nucleus in mast cells. Then, when positively stained by both c-kit and toluidine blue, they were considered as a mast cell; or as a non-mast cell when stained by neither c-kit nor toluidine blue (Figure). The confocal microscopy without fluorescent dyes differentiated 43 mast cells from 52 candidate cells and 37 non-mast cells from 39 candidate cells. Thus, the correct detection rate was estimated to be 88% (80/91). Limitations are that it is not yet possible to accurately differentiate degranulated mast cells from non-mast cells and to be directly applied to clinical practice because of problems in device equipment and potential intra- and inter-observer differences. 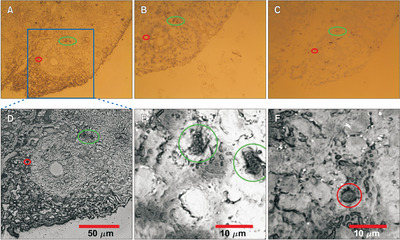 Figure 1. Representative photomicrographs showing intestinal mast cells in (A) unstained, (B) c-kit-stained, and (C) toluidine blue-stained slides. Cells within green and red circles are mast cell and a non-mast cell, respectively. Scattering confocal microscopy image of the selected area (blue square in [A]) obtained with a magnification of ×20 (D), and the cases of mast cell (E) and the case of a non-mast cell (F) with a magnification of ×100.

The role of mast cells in the pathophysiology of IBS has been argued.2 However, studies have demonstrated that mast cells can modulate sensory and motor nerves,3-6 increase epithelial secretion and intestinal permeability,7,8 and affect gut immunity and the brain-gut axis.9 These suggest that intestinal mast cells may play a pivotal role in the pathophysiology of IBS and thus, imaging mast cells might be used in diagnosing IBS.10 Although we could detect mast cells in patients with IBS using SCM, further research is needed to combine with confocal endomicroscopy for in vivo detecting mast cells and their changes after manipulating intestinal microbiota in IBS patients with VH.

This work was supported by the Basic Science Research Program through the National Research Foundation (NRF) of Korea and funded by the Ministry of Science and ICT (Grant No. 2020R1A2C1010014).