Abstract
Background/Aims
Functional dyspepsia (FD), one of the functional gastrointestinal disorders, is highly prevalent. Impaired gastric accommodation is proposed as a pathophysiology of FD. In order to assess gastric accommodation, a slow nutrient drinking test was developed. This study aims to evaluate the effectiveness of this slow nutrient drinking test among patients with FD in Japan.
Methods
Asymptomatic/healthy participants (n = 26) and those with FD (n = 16), were enrolled. An infusion pump was used to deliver the liquid meal into cups. They were requested to score their meal-related and abdominal symptoms at 5-minute intervals, using a 100 mm visual analog scale. They were instructed to end the test when they felt unable to ingest more or until after 50 minutes.
Results
The test ending time was significantly shorter in patients with FD than in healthy participants (22.3 ± 10.6 vs 45.0 ± 7.5 minutes, P < 0.001). The receiver operating characteristic curve indicated that the optimal cutoff time for detecting patients with FD was 30 minutes. The severity of meal-related and abdominal symptoms between healthy participants and those with FD was continuously different. Univariate and multivariate analyses revealed that the presence of symptoms of postprandial distress syndrome contributed to the short test ending time.
Conclusion
The 30-minute slow nutrient drinking test is a minimally invasive method of effectively evaluating symptoms of postprandial distress syndrome among patients with FD, in Japan.
Keywords: Diagnosis; Dyspepsia; Hypersensitivity; Satiation

Functional dyspepsia (FD) is a common functional gastrointestinal disorder that causes several upper-abdominal symptoms that are inexplicable during a routine clinical examination. The pathophysiology of FD is not completely understood, but composite etiological factors such as impaired gastric accommodation, delayed gastric emptying, gastric hypersensitivity, gut-brain axis dysfunction, and alterations in gastrointestinal microbiota, have been suggested.1

FD is classified into 2 types by the Rome criteria as follows: epigastric pain syndrome (EPS) and postprandial distress syndrome (PDS); EPS and PDS can overlap.2 PDS is relevant to meal-induced dyspeptic symptoms, including postprandial fullness and early satiation. These symptoms can be caused by impaired gastric accommodation, which 40% of FD patients usually have.3 Gastric accommodation is induced by the consumption of a meal, contributing to a decrease in gastric pressure and a rise in gastric compliance. These responses provide an appropriate gastric reservoir for food. Augmented gastric accommodation is expected to improve symptoms.4 Acotiamide, buspirone, tandospirone, and rikkunshito are likely to be effective drugs in FD by improving gastric accommodation.5-7

In clinical settings, for patients with FD, there is often a difference between the patients’ and physicians’ perceptions of symptoms. Patients believe their problems to be more serious than physicians are perceiving them to be.8 One of the reasons for this difference is the lack of objective tests to diagnose FD. Gastric barostat and ultrasound studies, intragastric pressure measurement, and gastric scintigraphy, are used to assess gastric accommodation. However, these tests are invasive and require special instruments or techniques, and therefore are mainly used for research purposes, instead of clinical settings. In the Japanese health insurance system, no gastric motility test for evaluating functional disease has been approved. Tack et al,9 developed a slow nutrient drinking test as a minimally invasive and convenient method of evaluating gastric accommodation. The efficacy of the nutrient drinking test in evaluating gastric accommodation in healthy volunteers has been reported in Japan.10 However, the efficacy and safety of a nutrient drinking test among Japanese FD patients have not yet been clarified. Moreover, the data of Japanese women are needed because the incidence of FD is higher in women and symptoms of FD are different in them.11 We aim to evaluate the efficacy and safety of the slow nutrient drinking test among patients with FD in Japan.

Patients with FD who presented to our hospital between March 2015 and August 2018 and asymptomatic/healthy participants, were enrolled in this study. FD was diagnosed using the Rome III criteria and was classified into 3 subtypes as follows: EPS alone, PDS alone, and EPS + PDS.12 The only inclusion criterion was that participants must be over 18 years of age. Patients were excluded if they had the possibility of developing organic dyspepsia on esophagogastroduodenoscopy; there were no other exclusion criteria. From the data shown in previous literature regarding the slow nutrient drinking test,13 the effect size was calculated as 1.35. The sample size required to detect a significant difference in test ending time between FD patients and healthy participants using the two-sided test with an α error of 0.05, power of 0.8, and effect size of 1.35, was calculated as 10. The primary outcome was detecting the ending time of the nutrient drinking test, which will help to distinguish Japanese patients with FD from healthy persons. The secondary outcome was the severity of symptoms during the test. Written informed consent was obtained from each participant. The study protocol was approved by the Ethics Committee of our institution (Approval No. 20140481). This clinical trial was registered in the University Hospital Medical Information Network (UMIN) with the registration number UMIN000017729.

A slow nutrient drinking test was performed around noon, after participants had fasted from the night before. An infusion pump (FP-1200S, Nipro Corporation, Osaka, Japan) delivered a liquid meal (ENSURE H, Abbott Japan, Tokyo, Japan) into 1 of 2 cups at a rate of 15 mL/min. This liquid meal contained 150 kcal of energy, 5.3 g of protein, 5.3 g of fat, and 20.6 g of carbohydrate, per 100 mL. Participants were asked to keep ingesting the liquid meal at the filling rate by replacing the filled cup with the empty one. During the test, they scored their meal-related (hunger, expected amount to be eaten, and satiation) and abdominal symptoms (bloating, postprandial fullness, nausea, belching, stomach cramps, and epigastric pain) at 5-minute intervals using a 100 mm visual analog scale (0-100: 0 = absent; 100 = worst). They were instructed to end the test when they felt unable to ingest more, or when 50 minutes had elapsed.

Before starting the nutrient drinking test, the participants filled in the Gastroesophageal Reflux Disease Questionnaire (GERDQ) and Hospital Anxiety and Depression Scale (HADS).14 The HADS is composed of 14 questions, 7 questions evaluate states of anxiety and are calculated as HADS-A score. The other 7 evaluate states of depression and are calculated as HADS-D score. GERDQ evaluated the frequency and severity of gastroesophageal reflux disease (GERD)-related symptoms.15

Data are presented as mean ± SD. Distributions were tested using the F-test. If the distributions were normal, the Student’s test was applied. Otherwise, the Mann-Whitney test was applied for analysis. Differences between the 2 groups were compared using Fisher’s exact test for categorical variables. Receiver operating characteristic analysis was performed at the test ending time to determine the cutoff value for detecting patients with FD. Univariate analyses were performed to identify the factors contributing to the test ending time below the cutoff value. Baseline variables with < 0.05 in univariate analysis were included in the multivariable analysis. Multivariate analysis was performed using logistic regression analysis. -values < 0.05 were considered statistically significant. All statistical analyses were performed using IBM SPSS Statistics version 26 (IBM Corp, Armonk, NY, USA).

The test ending time was significantly shorter in patients with FD than in healthy participants (22.3 ± 10.6 vs 45.0 ± 7.5 minutes, respectively; < 0.001) (Fig. 1A). Of the 42 participants, 14 (54%) healthy volunteers and 1 (6.3%) FD patient were able to perform the test for 50 minutes (Fig. 1B). From our results, the effect size was calculated as 2.11. The sample size required to detect a significant difference in test ending time between FD patients and healthy participants using the two-sided test with an α error of 0.05, power of 0.8, and effect size of 2.11, was calculated as 5. No severe adverse events were observed during any of the tests. 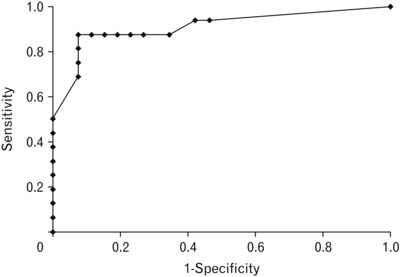 Figures 3 and 4 show a graph with the visual analog scale score plotted on the vertical axis and the time on the horizontal axis in healthy participants and FD patients. The data shown are for the duration of 30 minutes, which was the optimal cutoff value for the test duration. The difference in the severity of meal-related symptoms (hunger, expected amount to eat, and satiation) between the 2 groups became apparent 5 minutes after the start of the test (Fig. 3). The difference in the severity of abdominal symptoms (bloating, postprandial fullness, nausea, belching, and epigastric pain) between the 2 groups was consistently greater in patients with FD than in the healthy participants from the start of the test (Fig. 4). Stomach cramps were present in only 2 patients with FD (data not shown). 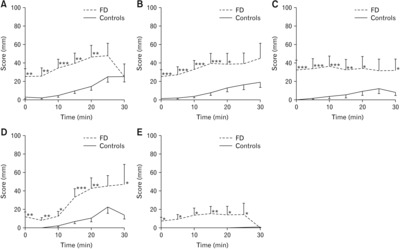 Table 2 . Univariate Analysis to Detect Contributing Factors to the Test End Time Below the Cutoff Time

The results of our study and those of previous studies are alike in terms of demonstrating significant differences in the severity of symptoms between healthy participants and those with FD.13 As already mentioned, one of the problems in clinical settings for patients with FD is the difference between the patients’ and the physicians’ perceptions of the symptoms. A standardized and reproducible nutrient drinking test can help objectifing disease perception between the patient and physician. Except for the infusion pump, no special devices are needed for conducting a slow nutrient drinking test. Compared with other gastric motility tests, such as gastric barostat, intragastric pressure measurement, and gastric scintigraphy, the slow nutrient drinking test is easier to administer in clinical settings.

We found a strong correlation between the presence of PDS symptoms and short test ending time. Our findings correlate with those of a previous study in which early satiety, one of the 2 major PDS symptoms, was significantly associated with the volume inducing maximum satiety.13 This suggests the possibility that slow nutrient drinking tests can be used to evaluate PDS symptoms. Impaired gastric accommodation, gastric hypersensitivity, delayed gastric emptying, and psychological factors, have been suggested as the pathophysiology of PDS symptoms. A combination of the drinking test and other motility tests, such as barostat study10 or intragastric pressure measurement,17 showed a relationship between the test ending time of the nutrient drinking test and gastric capacity. Therefore, a relationship between the short ending time in the nutrient drinking test and impaired accommodation is suggested. The efficacy of acotiamide (Z-338), 5-HT1A receptor agonists, 5HT1B/D receptor agonist (sumatriptan), STW-5 (a herbal product), and rikkunshito (a Japanese herbal medicine), is expected as fundic relaxants in the treatment of FD.2 Acotiamide, an acetylcholinesterase inhibitor that enhances gastric accommodation, was approved in Japan in 2013 and has been used as the first-line drug for FD symptoms, especially those of PDS. The efficacy of acotiamide has been assessed using an overall treatment evaluation approach or quality of life questionnaire that depends on the patients’ memory and subjectivity.18 Moreover, the efficacy of rikkunshito for PDS symptoms was shown in a multicenter, randomized, placebo-controlled, double-blind clinical study conducted in Japan.19 The result of a nutrient drinking test may help in choosing the appropriate treatment option.

This study has several limitations. First, the number of study participants was small. Using the calculated required sample size from previous literature, the sample size of our study should be enough for distinguishing FD patients from health participants. However, more FD patients are needed for multivariate analysis to identify the presence of PDS symptoms as a significant factor for shortening the test time. Second, this was a single-center study. Moreover, our hospital is a tertiary care center for functional disorders; therefore, many of the referred patients were refractory. Multicenter studies, which include general clinics or hospitals, and patients with mild FD symptoms, are needed to determine the efficacy of slow nutrient drinking tests in evaluating PDS symptoms.

Authors acknowledge the contributions of Tsuyoshi Yamane, Yuta Yamamoto, Tatsuto Mizuno, and Shinnosuke Kitazawa who aided for the assistance with the collection of data, and Editage (www.editage.jp) for English language editing.