Functional constipation is a common disorder that is classified into 3 large categories: slow transit constipation (STC), normal transit constipation (NTC), and defecation disorders (DD).1,2 DD is common in patients with medically refractory chronic constipation (CC) and is characterized by impaired rectal evacuation resulting from increased resistance to evacuation and/or inadequate rectal propulsive forces. Various terms including anismus, dyssynergic defecation, pelvic floor dyssynergia, obstructive defecation, and outlet obstruction have been used to describe DD.3-5 It is important to discriminate patients with DD from those with other types of CC, as those with DD have been shown to benefit from biofeedback therapy.6

Excessive straining, feeling of incomplete evacuation, and digital facilitation of bowel movements are symptoms related to DD, but these symptoms may also occur in patients with STC without DD. Several studies have advocated that no particular symptoms were useful in recognizing patients with DD.7,8 Thus, the diagnosis of DD should depend on physiologic findings by means of anorectal testing.3 In diagnostic guidelines, anorectal manometry (ARM) and the rectal balloon expulsion test (BET) are initially recommended in identifying DD, followed by defecography when ARM and BET results are equivocal or do not concur with the clinical impression.3,9,10 However, these anorectal tests are not available in many institutions.

In Western countries, colonic transit studies (CTSs) using radiopaque markers are routinely used in clinical practice to evaluate patients with CC. The most commonly used techniques include a single ingestion of markers with an abdominal X-ray after 3 days11-13 or a serial ingestion of markers over 3 days with an X-ray on the fourth day.14,15 Because a CTS is simple, safe, and inexpensive, clinicians frequently use rectosigmoid (RS) localization of markers or regional colon transit as an alternative for anorectal tests. However, the role of CTS in diagnosing DD remains controversial. Some consensus guidelines suggest that marker accumulation in RS can help differentiate DD from STC.16,17 In the latest guideline, a CTS result is no longer advocated as a diagnostic criterion for DD.3

Therefore, we attempt to reconfirm the relationship between marker location and the constipation subtypes. Moreover, we hypothesized that marker accumulation in RS would correlate with DD diagnosed by anorectal tests. This study aims to establish a simple method using a CTS to predict the possibility of DD.

This retrospective, observational cohort study was based on the medical records of patients who were referred to the anorectal physiology unit in our hospital for refractory constipation. All processes of this study were approved by the Institutional Review Board of our hospital (Approval code: K11-002), and written informed consent to perform the tests and use the test results was obtained from all patients.

All patients underwent ARM, a BET, and CTS. Barium defecography (BD) was performed if the results of those tests were discrepant or differed from the clinical impression. These tests were performed by the same physicians while using the same devices during the study period. Dyssynergic patterns on ARM and impaired evacuation on a BET or BD were defined by the proposed diagnostic criteria for DD.4 Details of each test are described below.

All patients ingested a Sitzmarks capsule (Konsyl Pharmaceuticals, Easton, MD, USA) containing 20 markers. The combination of drugs already used for the treatment of constipation was allowed. The CTS was assessed using the method by Bouchoucha et al,12 where an abdominal X-ray was obtained 72 hours after ingestion. Retention of 8 or more markers on imaging was defined as STC, and retention of less than 8 markers was defined as NTC. Localization of markers on an X-ray was done by identifying body structures as described in the study by Arhan et al19 (Fig. 1). 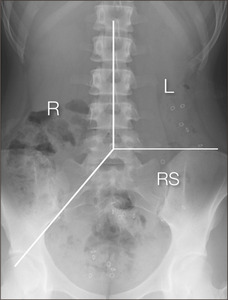 Figure 1. Colonic segments on an abdominal film. Spinal processes and imaginary lines from the fifth lumber vertebra to the right pelvic outlet and left iliac crest serve as landmarks and defined projection zones of the right (R), left (L), and rectosigmoid (RS) colon.

A suppository was used to empty the rectum before defecography. The patient was seated on a portable plastic toilet, and approximately 150 mL of diluted barium paste was injected into the patient’s rectum. Next, the patient was asked to start defecating, and fluoroscopy during evacuation was recorded on video. Retention of ≥ 50% contrast was defined as impaired evacuation.4

DD was diagnosed according to the Rome criteria for functional DD.5 The Rome criteria require evidence of at least 2 of the following: (1) the presence of a dyssynergic pattern (types I-IV) on ARM, (2) inability to expel a balloon, and (3) ≥ 50% retention of barium during defecography.

The primary outcome measure was RS localization of residual markers on day 3 of abdominal X-ray. The accumulation rate of markers was calculated as the ratio of the number of markers localizing in the RS colon among all the remaining markers on the film. Receiver operating characteristic (ROC) curves were used to find the diagnostic utility and optimal cutoffs of the RS accumulation rate. We stratified our cohort into patients with RS accumulation based on the ROC curves and those without RS accumulation.

Categorical variables are reported as frequencies and percentages, whereas continuous variables are reported as means and SD. We determined the correlation between RS accumulation and the individual anorectal tests or DD based on the Rome criteria, using sensitivity, specificity, positive and negative predictive values, and likelihood ratios (LR). LRs ≥ 5.0 or ≤ 0.2 were considered clinically relevant. All statistical analyses were performed using EZR software version 1.11 (Saitama Medical Center, Jichi Medical University, Saitama, Japan).

The study included 97 women (57.4%) and 72 men (42.6%) aged 22-92 years (mean age ± SD [67.2 ± 16.3] years). Patient characteristics and individual CCCS symptom domains are shown in Table 1. The breakdown of immediate pharmacotherapy for constipation was 98 cases of stimulant laxatives, 49 cases of osmotic laxatives, and 25 cases of enemas or suppositories and others (overlapping).

Findings of the Colonic Transit Study

Findings of the Anorectal Tests

The manometric characteristics and prevalence of each dyssynergic pattern are shown in Table 2. A dyssynergic pattern was observed in 158 (93.5%) patients, and the prevalence of type 1 dyssynergia was considerably high. The BET result was positive in 75 (44.4%) patients, and these patients were categorized as having impaired rectal evacuation. BD was performed in 83 (49.1%) patients, of whom 44 (53.0%) patients were unable to expel ≥ 50% of the barium. These patients were also categorized as having impaired evacuation (Table 3). Incidentally, BD also revealed a small asymptomatic rectocele in 7 patients.

Table 3 . Proportion of Positive Findings on Anorectal Tests in Patients With Normal and Slow Transit Constipation

Based on the findings of anorectal tests, 79 of 169 (46.7%) patients were identified to have DD. There were no significant differences in the prevalence of DD and positive findings on anorectal tests between patients with NTC and those with STC (Table 3).

For the rate of RS accumulation, a cutoff of ≥ 80% of markers was most useful (sensitivity, 31.6%; specificity, 83.3%) in discriminating patients with DD from those without DD. The corresponding area under the ROC curve was 0.514.

Table 4 . Relationship Between Rectosigmoid Accumulation and the Findings of Anorectal Tests

In this study, we found that RS accumulation was useful in discriminating DD from STC, but it did not help in distinguishing between DD and NTC.

The essential reason why RS accumulation failed to determine DD from NTC in this study was that no marker was retained in 70.9% of NTC cases. Prediction of DD by RS accumulation is impossible in cases where no marker is retained. Thus, most of the DD cases with NTC were missed, and the sensitivity was extremely low at 10.6%. On the other hand, since at least 8 markers were retained in patients with STC, DD could be identified based on RS accumulation. However, even in patients with STC, DD can be missed where most markers have not yet reached RS due to extremely slow transit. As a result, the sensitivity to detect DD from STC was still insufficient (62.5%).

Despite the frequent use of a CTS in clinical practice, there is little evidence that RS localization of markers is associated with the presence of DD. Staller et al20 reported that there was no significant correlation between patients with complete accumulation of markers in RS and those with DD defined by anorectal tests. Grotz et al7 also reported that RS transit delay was not helpful for discriminating DD from NTC as well as DD from STC. Moreover, Cowlam et al13 reported that neither RS transit time nor the geometric center of markers could discriminate patients with DD. On the other hand, Nullens et al21 showed that regional (descending and RS colon) transit profiles can differentiate DD from STC.

As mentioned earlier, the drawback of a CTS is that it misses DD when the residual marker is zero or when the markers do not even reach the RS colon. In order to increase the sensitivity of detecting DD by a CTS, 2 methods can be used: use different types of markers for a few consecutive days and take additional abdominal films. However, our aim is to establish a simple method, rather than a research tool, that can be applied in routine clinical practice. We believe that a single-capsule technique with a single abdominal film is the best method in terms of simplicity, cost, patient compliance, and radiation exposure. 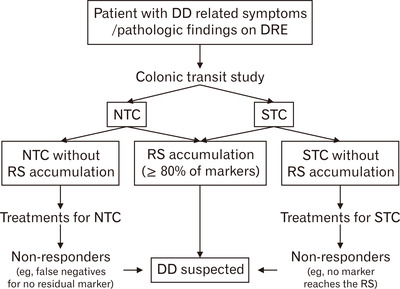 Among patients with refractory constipation with no underlying organic cause, assessments of anorectal function are initially recommended because DD may be responsible for delayed colonic transit.3,4 Using the aforementioned protocol, the presence of DD can be inferred by performing a CTS in general clinics. As a result, clinicians can make a timely diagnosis to provide an appropriate treatment or optimize referral to specialized centers.

This study has several strengths. The sample size was comparable to other reports. Clinical symptoms and results of the anorectal tests were evaluated using validated and standardized techniques and interpreted using established criteria. The limitations of this study include its retrospective, single-center, observational design and the low accuracy of ROC analysis due to the low sensitivity of RS accumulation.

In conclusion, the appearance of RS accumulation weakly suggests the presence of DD. However, a CTS is not suitable for the exclusion diagnosis of DD because there are many false negatives, particularly in NTC. When clinicians use a CTS to recognize the mechanism of its low sensitivity, it may be helpful for identifying subgroups of patients with CC.