Abstract
Background/Aims
Esophagogastric junction outflow obstruction (EGJOO) is characterized by elevated integrated relaxation pressure (IRP) and preserved esophageal peristalsis. The clinical significance of EGJOO is uncertain. This study aim to describe the clinical characteristics of these patients and to find out potential parameters to predict patients’ symptom outcome.
Methods
Consecutive patients who received high-resolution manometry examination in our hospital in 2013-2019 and met the diagnostic criteria of EGJOO were retrospectively included. Motility and reflux parameters as well as endoscopy and barium esophagogram results were studied and compared. Patients were also followed up to record their treatment methods and symptom outcomes.
Results
A total of 138 EGJOO (accounting for 5.2% of total patients taking high-resolution manometry examination in our hospital) patients were included. Only 2.9% of these patients had persistent dysphagia. A total of 81.8% of EGJOO patients had symptom resolution during follow-up. Patients with persistent dysphagia had significantly higher upright IRP (16.6 [10.3, 19.8] vs 7.8 [3.2, 11.5]; P = 0.026) than those without. Upright IRP can effectively distinguished patients with persistent dysphagia (area under curve: 0.826; P = 0.026) using optimal cut-off value of 9.05 mmHg.
Conclusion
EGJOO patients with persistent dysphagia and higher upright IRP (median > 9.05 mmHg) needs further evaluation and aggressive management.
Keywords: Deglutition disorders; Esophagogastric junction; Manometry

Esophagogastric junction outflow obstruction (EGJOO) is an entity of Chicago classification version 3.0, which is characterized by elevated integrated relaxation (≥ 15 mmHg) in combination with preserved esophageal peristalsis.1 Although it was considered as a major motility disorder, little is known about its etiology and clinical significance. EGJOO is a heterogeneous motility diagnosis. The symptoms of patients with patients vary greatly. The most common chief complaints of these patients are heartburn, regurgitation, and dysphagia.2-5 In most cases, patients’ symptoms can resolve spontaneously,4,6 with only a few progressing to achalasia.3 Its potential etiologies may include organic causes (eg, hiatus hernia, stricture, eosinophilic esophagitis, vascular obstruction, and malignancy) and functional causes (eg, early or incompletely express achalasia, esophageal wall stiffness, and drug effect).7 Most organic causes of EGJOO mentioned above can be identified by initial upper endoscopy. Barium esophagogram has long been utilized in the diagnosis of achalasia and the assessment of esophagogastric junction (EGJ) outflow. Some researchers even argued that EGJOO should be investigated further aggressively by endoscopic ultrasonography, functional luminal imaging probe, or CT.4,8-10 Despite the variety of means to evaluate EGJOO, none of current methods are known to be able to predict patients’ symptom outcome.

This study hypothesized that EGJOO is a heterogeneous disease that need to be further evaluated by endoscopy, barium esophagogram, and other parameters of high-resolution manometry (HRM). The current study aim to describe the clinical characteristics of patients with EGJOO and to find out potential parameters to predict patients’ symptom outcome.

Consecutive patients who received HRM examination in our hospital from January 2013 to December 2019 and diagnosed with EGJOO were retrospectively included. The exclusion criteria were: (1) gastroesophageal tumor history (2) gastroesophageal surgery history. Their baseline characteristics and symptoms were recorded in a questionnaire in our center including body mass index, impaction dysphagia question score (IDQ), Eckert-score, and gastroesophageal reflux disease questionnaire (GERDQ). Phone calls were conducted to follow up these patients in terms of symptom outcomes. Meanwhile, patients’ HRM, endoscopy, esophagogram, and multichannel impedance-pH monitoring (MII-pH) results were reviewed. This study was approved by the Ethical Review Board of Sun Yat-sen University (IRB No. 2019290), and was conducted following the concept of the Declaration of Helsinki.

HRM was performed after the upper endoscopy tests. The procedure was carried out as previously reported.11 Firstly, patients were required to stop swallowing for 30 seconds to record the basal pressure. Ten 5-mL liquid swallows were then performed in the supine position as well as five 5-mL liquid swallows in the upright position. Multiple rapid swallows (MRS) were administered at 1-2 second interval for 3 times both in the supine and upright position.12

The reflux monitoring procedure was carried out as previously reported.11 Patients were asked to live at their normal routines, and to note down their symptoms, postures, and meals during monitoring.

Patients were followed up until December 2019. Treatments of these patients were divided into (1) no specific treatment, (2) medication treatment (including antacid medication, neuromodulator, prokinetic agents, herbal medicine, or any other drugs for chief symptoms at standard dose for more than 8 weeks), and (3) specific surgery treatment. Patients whose chief symptoms relieved during the week before follow-up were considered as responders. Persistent dysphagia was defined as dysphagia that persists for more than 1 year or needs invasive treatment.

For categorical variables, the percentage form was adopted and chi-square tests were used for comparisons. The mean ± SD of normally distributed continuous variables were presented, which were compared by test. Median (95% confidence interval) and Mann-Whitney test were adopted for continuous data that were not normally distributed. Receiver operator characteristic curve was used to evaluate the efficacy of different parameters in predicting symptom outcomes and to determine the optimal cutoff of different indexes. The significance level (-value) was set at 0.05. 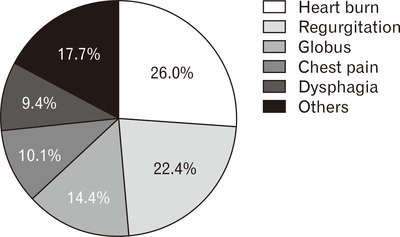 Most patients had benign symptom outcomes. The overall response rate of patients with EGJOO was 81.8%. More than half of patients with EGJOO did not receive any specific treatment but the symptoms relieved by itself. The most commonly used drugs were neuromodulator (eg, tricyclic antidepressants and serotonin norepinephrine reuptake inhibitors) and proton pump inhibitors. Response rates of different treatment methods were shown in Table 2. 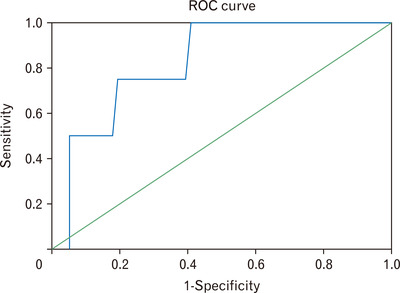 With the widespread application of HRM, EGJOO is no longer a rare motility diagnosis in clinic. Former studies suggested that EGJOO accounts for 8.2-24.3% of total patients taking HRM examination.3,4,14,16 Although it was considered as a major motility disorder, most patients diagnosed with EGJOO were dysphagia-free, not to speak of persistent dysphagia.2-5 Therefore, whether EGJOO is clinically significant remains controversial. The current study was designed to describe the clinical characteristics of these patients. In this study, only 9.4% of patients with EGJOO had a chief complaint of dysphagia, and 11.6% of patients had some extent of dysphagia. Most patients with EGJOO had normal endoscopy, barium esophagogram results and most, whether having received specific treatment or not, had benign symptom outcomes. With regards to parameters that is possibly pertinent to symptom outcomes, the current study found that persistent dysphagia symptoms were relevant to elevated upright IRP as well as to abnormal EGJ findings in endoscopy and barium esophagogram.

Despite the benign outcome of EGJOO, it is important to screen out patients who need aggressive management. A study published by Ong et al4 retrospectively included 40 patients with EGJOO and found that 73.5% of functional patients with EGJOO had spontaneous resolution of their symptoms and dysphagia may be a signal of further evaluation. Poong-Lyul Rhee analysed 169 patients with EGJOO detected by combined multichannel intraluminal impedance and HRM and found that suspected clinical significant patients are more likely to have dysphagia, compartmentalized pressurization, and abnormal liquid bolus transit.19 Another retrospective study found that Nadir upper esophageal sphincter-residual pressure may predict EGJOO patients’ symptom outcome for myotomy.5 It should be noted that none of the studies mentioned above compared upright HRM parameters as well as reflux parameters. A recent study published by Triggs et al14 included 310 patients with EGJOO. Each patient performed 10 supine and 5 upright 5-mL liquid swallows. It was found that the median upright IRP for patients with radiographic evidence of EGJOO or symptomatic dysphagia was higher than for patients without. In the current study, results of endoscopy, barium esophagogram, and reflux monitoring were all reviewed and compared. We also compared upright HRM parameters and some novel metrics such as MRS and IBP. In this study, symptoms of dysphagia especially persistent dysphagia were found to be correlated to elevated upright IRP and abnormal EGJ outflow findings during esophagogram and endoscopy.

In conclusion, further evaluation (ie, esophagograms) and aggressive management should be considered in patients with EGJOO when patients report dysphagia symptoms and had significantly increased upright IRP (median ≥ 9.05 mmHg).