This is an Open Access article distributed under the terms of the Creative Commons Attribution Non-Commercial License (http://creativecommons.org/licenses/by-nc/3.0) which permits unrestricted non-commercial use, distribution, and reproduction in any medium, provided the original work is properly cited.
Keywords: Autoimmune disease, Intestine, small, Lactulose, Mannitol

Intestinal permeability is mainly concerned with the permeation of molecules with a molecular weight greater than 150 Da.3 There are series of aqueous pores along the crypt villous axis of the small intestine.4 While the tip of the villus contains relatively small (< 6 Å) pores and they are present in abundance, the crypts contain much larger pores (50-60 Å) but they are in low abundance. The base of the villus contains intermediate size (10-15 Å) pores. Most of the probes used to measure intestinal permeability are water-soluble, which cannot penetrate the lipid cell membrane of enterocytes and thus use the paracellular route through the tight junctions. The smaller probes can easily pass through the small, more numerous and more accessible tight junctions of the villous tips, whereas the larger probes have to make use of the larger, less accessible and less numerous pores at the crypt base.

Intestinal permeability is measured with the help of non-metabolizable probe (either by human gut or even by the bacteria present in the gut) molecules which pass across the mucosal barrier and are excreted in the urine after being absorbed into the systemic circulation.8 Quantitation of the probe in a timed urine collection provides a measure of the fraction of ingested probe that has penetrated the mucosal barrier. Only a small proportion of this large probe should get through the intestinal mucosa, reach the circulation, get filtered by the kidney and get measured in the urine over a defined point of time. If there is an abnormality in the paracellular transport; the passage of the probe is enhanced and thus more is excreted in the urine which suggests abnormality in the intestinal permeability. Intestinal permeability can be assessed using a variety of marker probes such as lactulose, mannitol, rhamnose and cellobiose, polyethylene glycol (PEG) 400, PEG 1000, 51Cr-EDTA and 99mTc-DTPA. The characteristics of these probes are summarized in Table 1.

Earlier a single probe (such as lactulose, cellobiose, PEG and 51Cr-EDTA) was used to measure intestinal permeability. The urinary excretion of single dose of a test probe is dependent on a number of non-mucosal factors (such as gastric emptying, intestinal transit, renal clearance and incomplete urine recovery) other than the mucosal integrity itself, which not only reduce the sensitivity and specificity of test procedure, but also pose a problem in the interpretation of the data (Table 1).

To overcome the mucosal and non-mucosal factors (Table 2), Menzies7 suggested the use of two sugars or a combination of a sugar and non-sugar probe for assessment of intestinal permeability. It involves the simultaneous oral administration of disaccharide and monosaccharide and measurement of their excretion in urine over a defined period of time (Table 3). Intestinal permeability is measured as the ratio of percentage of excretion of disaccharides/monosaccharides in the urine.

The individual variations due to the non-mucosal factors (such as gastric emptying, intestinal transit, renal clearance and incomplete urine recovery) are circumvented when the urinary recovery is expressed as a ratio (lactulose: mannitol ratio or LMR) since both of them are affected equally by these factors, except for the route of permeation.8 Any variation in premucosal and post mucosal determinants of the sugars affects overall permeation of the test probe equally, so that urinary excretion ratio (percentage of orally administered test dose) is not affected.

Method of Assessment of Intestinal Permeability

After an overnight fasting, subjects undergoing assessment of intestinal permeability are asked to ingest sugar probes (5 g of lactulose, 2 g of mannitol in 100 mL water for LMR) after voiding their first urine (which is collected). No food or drink is allowed until the completion of the test. Water intake is permitted after 1 hour from the ingestion of the test solution. All the subjects should be asked to drink a minimum of 1,000 mL of water during urine collection time to ensure sufficient urine output. All the urine passed in the subsequent 5 hours should be collected into a 2 L plastic container containing 1 mL of chlorohexidine (20 mg/mL) as a preservative. The volume of the urine is measured and a small volume (10-100 mL) is preserved and stored in -80℃ until analysis.

Lactulose and mannitol ratio is the most commonly used test for assessment of intestinal permeability13 and the most reliable method of measurement of concentration of lactulose and mannitol in the urine is HPLC. HPLC is a chromatographic technique used to separate a mixture of compounds with the purpose of identifying, quantifying and purifying the individual components of the mixture. Small amount of urine sample is injected into a HPLC column which is filled with solid particles (called stationary phase) and the sample mixture is separated into compounds as it interacts with the column particles. These separated components are detected at the exit of this column by a flow-through device (detector) that measures their concentrations. An output from this detector is called a "liquid chromatogram." The separation of the components in the sample depends upon many parameters including chemical structure and molecular weight; but the most common parameter for the identification of individual compounds in the sample is its retention time (the time it takes to elute from the column after injection) (Figure). To measure the amount of solute (either lactulose or mannitol) in the urine sample, a standard curve is plotted by running the known amount of the solute and the amount of solute present in unknown sample is then estimated.

The lactulose and mannitol ratio is a useful, simple, non-invasive and a reliable test for estimation of intestinal permeability.13 In this test, while mannitol uses smaller and more numerous tight junctions at the villous tips mostly for its passage; lactulose being a larger molecule passes through larger pores in the crypts. Under normal physiological condition, disaccharide due to its large size is restricted from passing across the villous tip whereas monosaccharides can do so with relative freedom. The sizes of probe and pore in the intestinal mucosa have a bearing on the abnormalities in the permeability among different disease conditions. Since patients with Crohn's disease do not generally have diffuse villous atrophy, the mannitol excretion remains unaffected in them, while the excretion of mannitol is affected greatly in celiac disease where villous atrophy is the hallmark. Loss of villi leads to loss of smaller tight junctions at the villous tips affecting excretion of smaller probes such as mannitol.4 Therefore, an increased intestinal permeability observed in patients with Crohn's disease is predominantly because of the increase in permeation of lactulose.

Normal Values for Lactulose and Mannitol Excretion in the Urine

Testing of intestinal permeability is not required for routine patient care, however it is an important tool to understand the function of the paracellular transport in the research setting. There are a number of diseases that have been known to arise as a consequence of an increase in mucosal permeation of macromolecules.

Screening of the high risk groups

Measurement of intestinal permeability has been a useful technique to study the increase in the susceptibility to a few autoimmune diseases in a high risk group, such as first degree relative of celiac disease and Crohn's disease. A girl found to have an increase in intestinal permeability while asymptomatic during the family screening study, developed Crohn's disease 8 years later.20

Overall assessment of paracellular route of transport can be assessed by measurement of intestinal permeability. Different probes (sugar and EDTA), having different area of absorption/metabolism, can be used to study the permeability of the specific area of the gastrointestinal tract. This test is not required for day to day patient's diagnosis and management; however, it is an important tool which helps in the study of the early phases of pathophysiology of many diseases such as celiac disease, Crohn's disease, type I diabetes and food allergy. 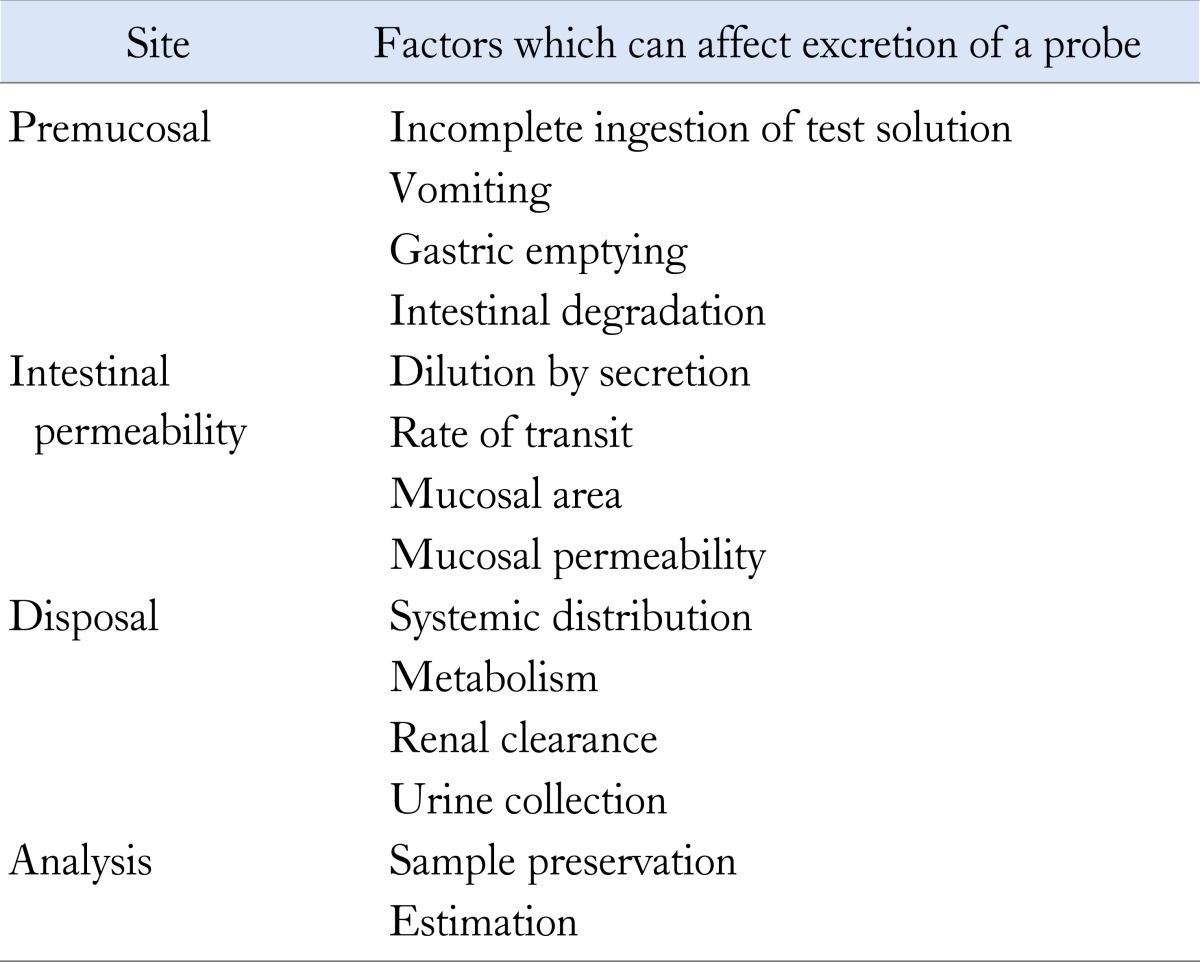