Achalasia patients would feel exacerbated dysphagia, chest pain and regurgitation when they drink cold beverages or eat cold food. But these symptoms would relieve when they drink hot water. Reasons are unknown.

Twelve achalasia patients (mean age, 34 ± 10 years; F:M, 3:9) who never had any invasive therapies were chosen from Peking Union Medical College Hospital. They were asked to fill in the questionnaire on eating habits including food temperature and related symptoms and to receive high-resolution manometry examination. The exam was done in 2 separated days, at swallowing room temperature (25℃) then hot (50℃) water, and at room temperature (25℃) then cold (2℃) water, respectively. Parameters associated with esophageal motility were analyzed.

Clinically, when achalasia patients talked about their medical history, they had such similar experience. If they drank iced beverages or ate iced food, dysphagia, regurgitation and even chest pain would exacerbate. On the other hand, if chest pain attacked, they would try drinking a cup of hot water and chest pain would relieve within a few minutes. Upon further history taking, many achalasia patients preferred hot food to iced food, feeling that hot food would "open the gate of the esophagus to the stomach." In a small unpublished research of our center, hot water drinking relieved 48% of dysphagia, 79% of regurgitation and 84% of chest pain in 34 achalasia patients. However the reason why achalasia esophagus "prefers" hot temperature and "hates" cold temperature remains unknown.

With this question, we searched relevant articles on the response of esophagus to different temperatures. Those articles were so few, and mainly belonged to the 70s and 90s of the last century. Winship et al1 conducted a manometric research to let 11 healthy subjects to swallow both iced and hot water. Results showed that iced water would slow the transit of propagated waves of esophageal body, prolong the duration of distal esophageal contraction and increase the amplitude of lower esophageal sphincter (LES) after-contraction; on the contrary, hot water would fasten the transit of propagated waves, shorten the duration of distal esophageal contraction and decrease the amplitude of LES after-contraction. However, LES resting pressure was not included in their study. Catalano et al2 reported a case of esophageal motility disorder, in which the esophagus showed non-propagated contraction. The patient felt dysphagia and chest pain when he drank iced water. But when he drank hot water, those phenomena disappeared.2 Triadafilopoulos and his colleagues found that drinking hot water would relieve symptoms of various esophageal motility disorders, including non-specific esophageal motility disorder, diffuse esophageal spasm, nutcracker esophagus and also achalasia. They found that hot water reduced the contraction amplitude of esophageal body and fastened the food bolus transit,3 but the specific motility changes in achalasia were not noted in their study and the impact of iced water on motility was not included as well. Thus, the aim of our research was to observe how swallowing iced and hot water could change esophageal motility in achalasia patients and to find out the reason how iced food exacerbates and how hot food relieves achalasia symptoms.

Questionnaires were given to 12 achalasia patients (75% male, ages 21-53 years) diagnosed at Peking Union Medical College Hospital (PUMCH) from Jan 2010 to May 2010. They never had any invasive therapies, including dilation, surgery and botulinum toxin. They were required to receive high-resolution manometry study under different temperatures. The study was approved by PUMCH Ethics Committee, and informed consent was signed before manometric study.

Questionnaires about eating habits were given to achalasia patients immediately after diagnosed at the clinic. As was illustrated in Table 1, the questionnaire included three major achalasia symptoms: dysphagia, chest pain and regurgitation. In the "dysphagia" session, not only food amount and time consumed per meal, food able to swallow and sense of obstruction were included, but also reactions to cold and hot food were described. In the "chest pain" session, severity and frequency were asked. In addition, whether hot water drinking could relieve chest pain attacks was included. In the "regurgitation" session, amount and frequency were assessed, especially after meals.

The 12 patients, who never had any invasive therapies, were presented to the motility laboratory at PUMCH. A solid-state manometric assembly (Manoscan; Sierra Scientific Instruments Inc., Los Angeles, CA, USA) was used, with 36 pressure sensors lined at 1 cm intervals. The diameter of the probe was 4.2 mm and the accuracy of sensor was approximately 1 mmHg.

Patients had at least 6 hours fasting before manometric exam. The probe was placed transnasally, and positioned to record both upper and lower esophageal sphincter, with 1-2 sensors in the stomach. Studies were performed in a seated position and separated in 2 days (Fig. 1).

Manometric results were recorded into two different files for each patient according to hot and iced temperature. All data analysis was done with the software Manoview Analysis (Sierra Scientific Instruments Inc.). Wang ZF was the interpreter, who was unaware which file was about hot water and which was about iced water. Resting pressure was taken before the patients started to swallow 10 mL of hot/iced water, and after that swallow was just finished. LES residue pressure and relaxation rate, amplitude and duration of esophageal body were taken from each swallow of 5 mL water. LES residue pressure was analyzed using 2 second integrated relaxation pressure.4 Amplitude and duration of esophageal body were the average of distal esophagus 5 to 15 cm above LES.

Questionnaire for eating habits of the 12 patients was illustrated in Table 1. Nine patients reported discomfort when they ate cold food, including exacerbated dysphagia and regurgitation (7/12) or aggravated chest pain attacks (2/12). Two patients never ate cold food and only one had no discomfort after eating cold food. On the contrary, all patients reported no additional discomfort when they ate hot food. In addition, 8 out of 12 patients tried drinking hot water to relieve their chest pain attacks, effective in 5 patients and not effective in 3 patients.

The twelve achalasia patients who never had any invasive therapies agreed to have manometric exam described previously on informed consent. Their demographic information and baseline manometric data as well as Chicago classification for achalasia are listed in Table 2.

In this research, we found most achalasia patients reported exacerbated symptoms when they took iced beverages or food but no additional discomfort was reported when they ingested hot beverages or food. Somehow, hot water drinking had analgesic effects during chest pain attacks. Further manometric studies found that cold water could increase LES resting pressure and prolong the simultaneous contraction of esophageal body. On the other hand, hot water could decrease LES resting pressure as well as LES residue pressure and shorten the simultaneous contraction of esophageal body.

Besides, our research found LES pressure changed by the temperature, while Triadafilopoulos' study found no changes.3 Probable reasons are as follows: first he included most non-achalasia patients (39/48), in which LES function was not or slightly impaired, and there were only 9 achalasia patients. The statistical results would not represent achalasia patients. Second he used a water-perfusion Dent sleeve probe. And the water both pumped and swallowed usually stayed in the esophagus due to impaired LES relaxation in achalasia patients. Under such condition, hot or iced water would mix with the residual water and its temperature would change, probably leading to ambiguous results. We had three strategies to minimize the bias. First, we used a solid-state probe instead of a water-perfusion probe and let the patient examined in a sitting position. Second, we separated iced and hot water swallow into two different days. And finally, we set 15 minutes as the interval between room-temperature water swallow and hot or iced water swallow. Nevertheless, no regular change was found on LES residue pressure after swallowing iced water and there was a slight decrease of LES relaxation rate, without statistical significance. This is probably because of the relatively small sample size (N = 12), and futher study needs to confirm this finding.

Based on our motility study, the effect of swallowing hot water is supposed to help relieve achalasia symptoms by 3 mechanisms. First, LES pressure is the main resistance for food bolus to pass into the stomach, and hot water could reduce the resting and residue pressure. Second, simultaneous and non-propagated contraction of the esophageal body would narrow the esophageal lumen, and provide additional viscous resistence for food bolus to pass the lumen. The hot water was found to shorten contraction duration, which means less contact time of food bolus with the esophageal wall, and viscous resistance would be reduced thereafter. Third, hot water could be analgesic. Pathophysiology of chest pain in achalasia is multifactorial: esophageal stasis, esophageal spasm and enteric neuropathy were all suggested.6 In this research, we found hot water could reduce LES pressure and contraction duration of esophageal body, thereby relieving the esophageal spasm in some of our patients. However there was no analgesic effect in other patients. Perhaps neuropathic pain was the main cause. On the contrary, cold temperature was found to increase the LES pressure and prolong the contraction duration, which would add resistance for the food bolus to pass the esophagus, probably explaining the exacerbated achalaisa symptoms induced by iced beverages or food.

There were extremely few published studies addressing the mechanism of how swallowing hot and cold water influenced esophageal motility. If there was, it was only about cold temperature. Mustafa and his colleagues had proved grading contractions of smooth muscle strips from rat esophagus were inversely correlated to cooling temperature. They also found the rhythmic contractions were also abolished, just like "cooling" the muscle fiber to ice. Those were proposed to be myogenic, in which sarcoplasmic Ca2+ translocation was found to cause the results.7 This finding was similar to what we found in "cooling" achalasia esophagus: resting LES pressure increased as well as the contraction duration of esophageal body. We proposed that hot temperature would "shut down" sarcoplasmic Ca2+ translocation, leading to the inverse results, although no published articles have supported this. Since achalasia is a neurogenic disease (nitric oxide synthase neurons damaged) and no regular changes of esophageal body contraction amplitude were found in contrast to LES, we suspect that there is possibly an underlying neurogenic mechanism. More studies could be done to prove this.

Based on all our studies, we usually tell our achalasia patients to avoid eating cold food or drinking iced beverages and suggest them to eat hot food, drink hot tea or coffee, and swallow food with a sip of hot water. Cold food could cause LES spasm and "freeze" esophageal body, making food bolus harder to pass through esophagus. On the contrary, hot food causes LES relaxation and "warms" the esophageal body, making food bolus easier to pass. On chest pain attack, a cup of hot water is suggested, because it could probably relieve esophageal spasm.

Fig. 1. Manometric protocol. The study was done in two separated days and all patients were required to stop nitrites or calcium channel blocker, if taken, for 24 hours. On the first day, patients were asked to swallow 5 mL of room-temperature water three times and rest for 15 minutes. After that, patients were required to swallow hot water (50℃) 10 mL and rest for 30 seconds. Finally, patients made the last three swallows of hot water (50℃), 5 mL each time. Procedure on the second day was approximately the same as the first day, with "Hot" water replaced by "Iced" water (2℃). RT, room temperature. 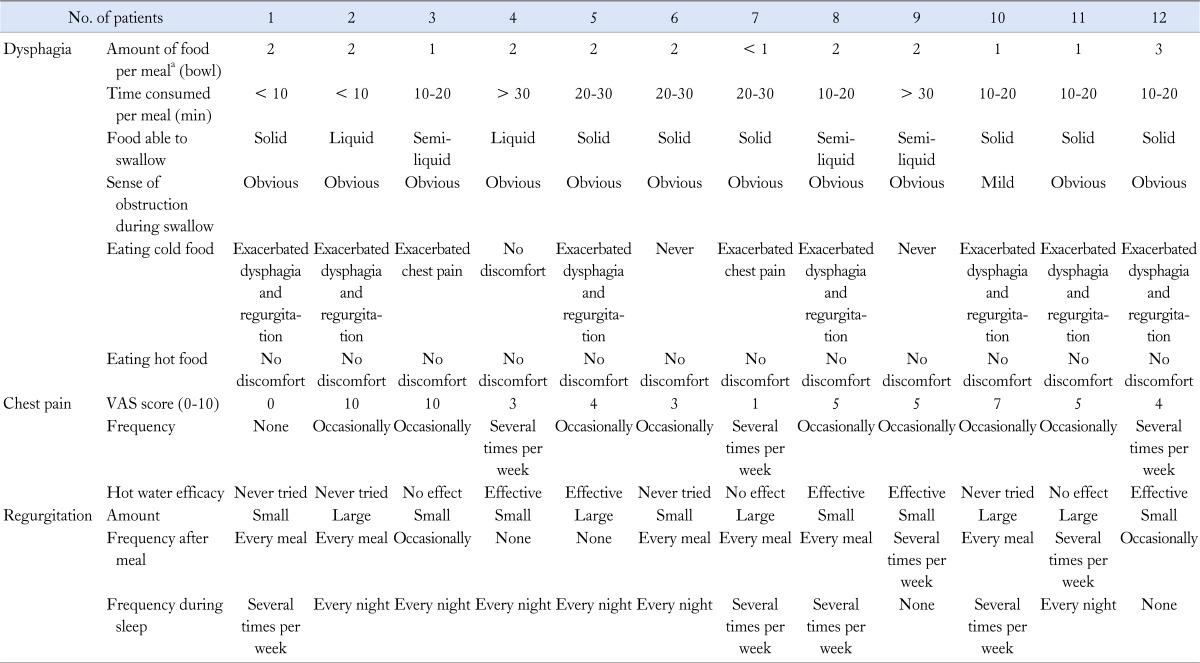