Solifenacin, a muscarinic type 3 receptor antagonist, is used to treat overactive bladder in adults. The aim of this study is to examine the efficacy of solifenacin on the symptomatic relief of diarrhea predominant irritable bowel syndrome (IBS-D).

A total of 20 patients with IBS-D were enrolled. After a 2-week observation period, all participants received solifenacin for 6 weeks. Subsequently, the administration of solifenacin was discontinued and ramosetron, a serotonin 3 receptor antagonist, was administered for 4 weeks. Overall improvement, the IBS-symptom severity scale (IBS-SSS), and frequency of defecation were assessed.

The efficacy of solifenacin in the treatment of IBS with diarrhea was not inferior to that of ramosetron. Further placebo-controlled parallel studies are needed.

Irritable bowel syndrome (IBS) is a condition characterized by the presence of chronic abdominal pain or abdominal discomfort accompanied by abnormal bowel movements, such as diarrhea or constipation.1 In IBS, symptoms are improved by defecation, and there appears to be no organic substance or biochemical abnormality that can explain the symptoms. In population-based Japanese surveys, the prevalence of IBS has been estimated as 10%-15% and the annual incidence as 1%-2%.2,3 Because gastroenterologists frequently focus mainly on inflammatory or malignant disorders, functional disorders such as IBS, that are associated with subjective symptoms, are less likely to be the target of aggressive treatment. The complaints of patients with IBS consist of general gastrointestinal symptoms, and differential diagnosis of complications such as infectious enteritis is necessary. Therefore, it is important to obtain a detailed history of the disease. The treatment for IBS tends to consist of merely the prescription of common gastrointestinal medications. For healthcare providers, IBS can be difficult to detect, and patients are often dissatisfied with the outcome even when they consult a physician, resulting in a low consultation rate at medical institutions. Currently, the majority of patients remain undiagnosed, including those who are themselves unaware of their disease. Although the disease is not life-threatening, the symptoms of IBS clearly cause deterioration in patients' quality of life, and it affects a large number of patients. The societal losses due to IBS are immeasurable. Depending on the type of stool, IBS can be classified into 4 categories: constipation predominant IBS (IBS-C), diarrhea predominant IBS (IBS-D), mixed IBS (IBS-M), and unsubtyped IBS.1 Among those categories, IBS-D is a particularly serious problem for patients who commute to work or to school by public transportation. Anticholinergic drugs, the serotonin 3 (5-HT3) receptor antagonist, ramosetron,4 high molecular weight polymers (polycarbophil calcium),5 gastrointestinal motility regulators, Probiotics preparations (such as Bifidobacterium infantis 35624)6 and laxatives are used in the treatment of IBS. However, no medication for the treatment of IBS has been able to provide the same levels of efficacy as proton pump inhibitors that are used for the treatment of peptic ulcers or gastroesophageal reflux disease.

Muscarinic type 3 (M3) receptors are believed to be the key molecule for the pathogenesis of IBS,7 and the efficacy of M3 receptor antagonists in the treatment of IBS has been the focus of several studies.8,9 Although a M3 receptor antagonist such as mepenzolate bromide has been used as a modulating agent of gastrointestinal motility since 1967 in Japan, no clinical trials had been conducted to reveal the efficacy for IBS defined under the modern Rome criteria. Until now, even though mepenzolate bromide has been used empirically to IBS, no significant effect on IBS has been reported even in the non-randomized clinical study or in animal study. Recently, solifenacin [(+)-(1S,3'R)-quinuclidin-3'-yl 1-phenyl-1,2,3,4-tetrahydroisoquinoline-2-carboxylate monosuccinate], a M3 receptor antagonist, has been used in the treatment of overactive bladder (OAB) in Japan, and its usage is covered by national insurance. Our recent epidemiological study also demonstrated a high rate of comorbidity between IBS and OAB.10 In addition, the mode of solifenacin action on bowel dysfunction in vivo using experimental models that reproduced the symptoms present in IBS was similar to that of darifenacin, a selective M3 receptor antagonist, with equivalent potencies. By contrast, propantheline, an anti-muscarinic drug that has been used for IBS, was much less potent.9

Because of the pathogenetic similarities between IBS-D and OAB with respect to the presence of hyperactive smooth muscles,9 the present study was designed to examine the efficacy of solifenacin for the treatment of IBS-D.

The present study is a single-cohort prospective trial. The protocol for this study was approved by the ethics committee of Tokyo-Eki Center-Building Clinic (TEC-C C0005, Nov. 7, 2010, UMIN000005577). This study included IBS-D patients, age 20 years or older, who were treated as outpatients in Tokyo-Eki Center-Building Clinic. The required sample size for testing the equality of proportions was 16 patients based on a minimum expected difference of 10% and standard deviation of 10% in the overall improvement between solifenacin and ramosetron, with an alpha error of 5% and 80% power.11 Thus, after considering the number of patients who dropped out, a total of 20 patients were recruited for the present study.

The following participants were excluded from the study: subjects with a history of laparotomy for upper or lower digestive tract surgery, narrow-angle glaucoma, severe diseases (such as urinary retention) or disabilities that could have affected the participants' condition or the test results; and whose physical examination, laboratory tests, vital signs (blood pressure and pulse rate) and electrocardiogram had shown clinically problematic abnormalities.

After a 2-week run-in period, the administration of solifenacin 5 mg tablets was initiated. In participants who showed overall improvement 2 weeks later, solifenacin 5 mg was continued for another 4-week period. In participants who showed no overall improvement, the dose of solifenacin was increased to 10 mg and was continued for 4 weeks. However, in participants who had difficulties taking the 5 mg dose after 2 weeks, the treatment was either discontinued or the dose was decreased to 2.5 mg. Starting at 6 weeks, ramosetron 5 µg was administered continuously for 4 weeks if the attending physician determined that no problems had appeared during the preceding 4 week treatment. A flowchart of the tests is shown in Figure 1.

During the study period, parallel administration of therapeutic agents targeting the digestive system was prohibited, except for medications for purposes other than the treatment of IBS that were administered chronically or taken as needed. In addition, medications that were likely to affect gastrointestinal motility were also prohibited.

The differences in background characteristics between participants showing improvement in symptoms and those showing no improvement were analyzed using the Chi-squared test and unpaired t test. IBS-SSS scores on the day of each hospital visit and the differences in the average numbers of stools per day were analyzed using a paired t test. All statistical analyses were conducted using the SPSS statistics version 18.0 for Windows software (SPSS Japan, Tokyo, Japan; SPSS Inc., IL, USA). The data in the tables were expressed as mean ± standard deviation. Two-sided P-values were considered as statistically significant at a level of 0.05.

There were 3 solifenacin medication groups: dose increment group (10 mg, n = 4), no dose change group (5 mg, n = 13), and dose-decreased group (2.5 mg, n = 3). At the end of the solifenacin treatment period (visit 3), no significant difference was observed in overall improvement, total SSS and number of stools. At the end of the ramosetron medication, no significant difference was observed in these 3 groups in terms of overall improvement (P = 0.481). Moreover, although stool number tended to decrease in the dose-decreased group, no statistically significant difference was observed with respect to total SSS and stool number per day between these 3 groups: dose increment group (123 ± 69 and 2.3 ± 1.0), no dose change group (119 ± 56 and 2.0 ± 1.9), and dose-decreased group (140 ± 49 and 1.1 ± 0.8; P = 0.853 and P = 0.640). Furthermore, the difference in these 3 groups could not be a cofounding factor that affected the results of the ramosetron treatment.

Since this study was an open-label study and since the evaluation was based on symptoms, the possible involvement of the placebo effect in the results cannot be excluded. However, even when this is taken into consideration, the present study verified the efficacy of solifenacin on the symptomatic amelioration of IBS-D. Solifenacin at doses from 2.5 to 10 mg resulted in overall improvement at 6 weeks in 19 participants (95%), 10 of whom (50%) showed remission of symptoms. Since pooled estimate of placebo response was reported to be 42.6% (95% confidence interval, 38.0%-46.5%) in 19 complementary and alternative medicine trials in IBS,13 solifenacin may be more effective than placebo. In addition, the effects of solifenacin on the symptoms of IBS were comparable to the effects of ramosetron, a medication that is used in the treatment of IBS-D in men and is covered by national insurance in Japan.

Currently, no therapeutic drugs have been shown to be definitively effective in the treatment of IBS. In addition, IBS has very high prevalence; according to a recent questionnaire survey of 10,000 Japanese citizens, the prevalence of IBS was 13.1%, indicating that approximately 12 million (12.5%) adult Japanese citizens (20-79 years old) have IBS.3 Meanwhile, in a 10-year follow-up study conducted on 3,873 patients, the incidence of new cases of IBS over the 10-year period was 15%.14 Thus, while IBS is a disease with high incidence, patient awareness of the disease is low, and since the majority of IBS patients treat themselves by self-medicating with over the counter drugs instead of consulting medical professionals, there are significant economic and social losses. Accordingly, therapeutic drugs effective against IBS are highly anticipated.

The sequential use of therapeutic agents in functional gastrointestinal disorders has been criticized because symptom severity may fail to return to baseline after the first treatment period. In the present study, since the first treatment was fixed to solifenacin and the second to ramosetron, there is a possibility for the overestimation of therapeutic effect of ramosetron in comparison with that of solifenacin. Therefore, we cannot conclude which medication is better for the treatment of IBS-D based on the results obtained in the present study. However, the present results suggest at least in the management of IBS-D that solifenacin is not inferior to ramosetron, with a possible superiority of solifenacin in terms of the days of pain and the degree of satisfaction with defecation habit.

This study was an open-label trial, and the data are neither those of parallel group trial nor crossover study; however, the results showed the potential therapeutic application of solifenacin in the treatment of IBS-D, and the data from this study are significant in that they indicate at least the possibility of a new therapeutic drug for IBS-D. On the other hand, with the present non-parallel study, the possible placebo effect could not be excluded. On the basis of these results, further placebo-controlled parallel group studies remain awaited to confirm the efficacy of solifenacin.

Fig. 1. The flowchart of the tests. 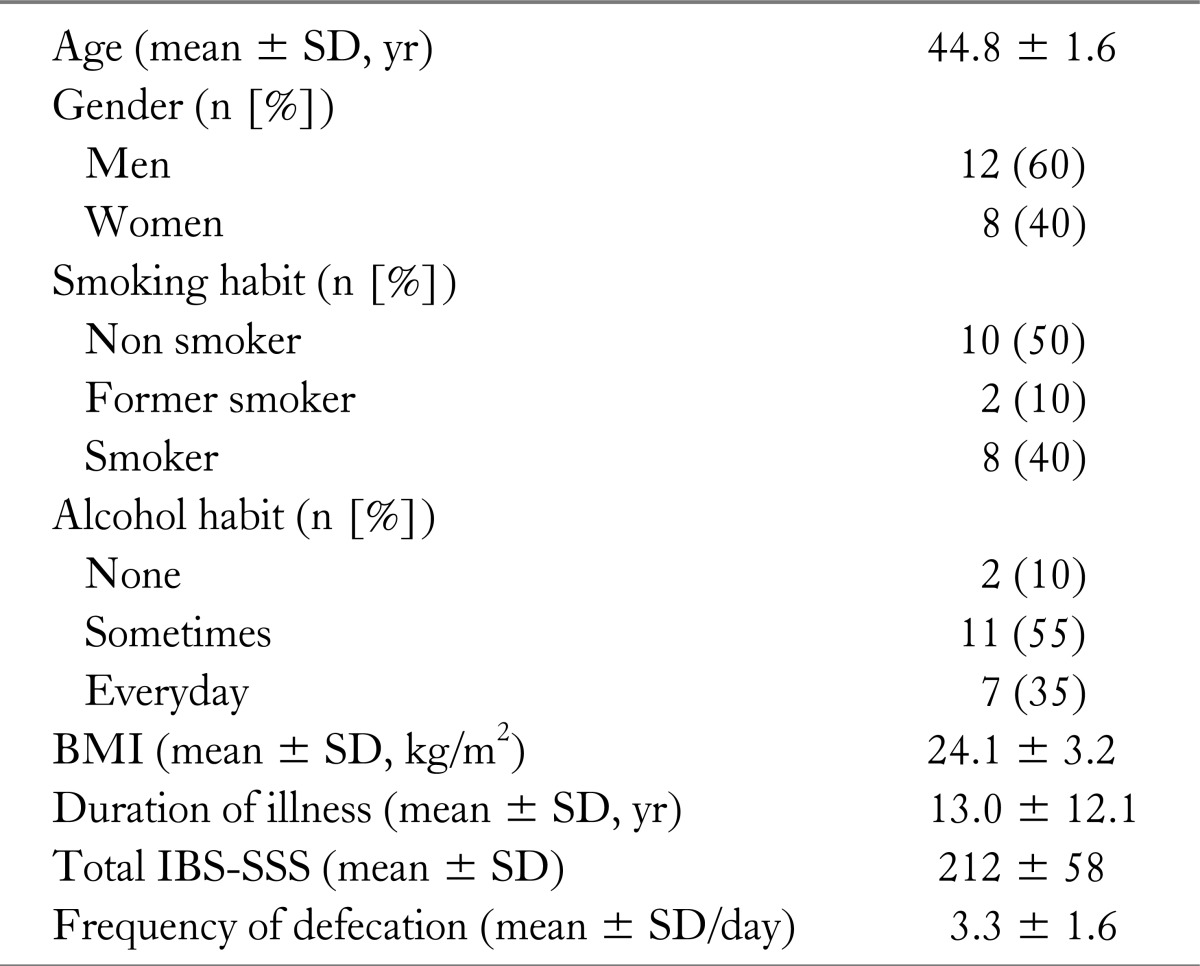