The prevalence of irritable bowel syndrome (IBS) after excluding organic disease has not been reported in Korea.

The prevalence of IBS increased with decreasing age and increasing psychological stress, and was positively associated with female sex and current smoking.

Irritable bowel syndrome (IBS) is a chronic, relapsing gastrointestinal problem, characterized by abdominal pain, bloating, and changes in bowel habits. Although the precise prevalence and incidence depends on the criteria used, most studies agree that it is a common disorder, and patients present frequently to general practitioners and to specialists.1,2 The prevalence of IBS is approximately 10% in Western populations2,3 and 2.6% to 9.6% in Korean populations.4-6 However, previous population-based studies did not exclude organic bowel disease using colonoscopy.1,2,4-6 Therefore, we excluded organic bowel disease using colonoscopy and abnormal laboratory tests in participants in a health screening program, and we evaluated for risk factors of IBS after adjusting for many potential confounding factors.

This study is a cross-sectional study using a large self-motivated health screening cohort at the National Cancer Center, Korea. We included participants who underwent a comprehensive screening program including colonoscopy and completed questionnaires from June 2007 to December 2007. We excluded participants who had colorectal cancer, previous colorectal surgery, inflammatory disease of the colon, and abnormal results of thyroid function tests.

The enrolled subjects were racially homogeneous Koreans. Personal data (age, sex, alcohol consumption, smoking status, personal medical history, gastrointestinal symptoms, job, and socioeconomic status) were collected before endoscopy. Smoking and alcohol consumption status was classified as current (daily or occasionally) or non-current. Frequent alcohol consumption was defined as 4 or more drinks per week. The degree of subjective physical and psychological stress was evaluated using a visual analogue scale with responses ranging from 0 (none) to 10 (extreme); we defined stress as mild for responses of 0 to 2, moderate for 3 to 6, and severe for 7 to 10.

Weight and height measurement was automated (X-SCAN PLUS II, Jawon Medical Co., Kyungsan City, Korea), and body mass index (BMI) was calculated as weight divided by height squared (kg/m2).8 Waist circumference was measured at the midpoint between the lower borders of the rib cage.

The day before colonoscopy, participants ingested 45 mL aqueous Fleet Phospho-soda (Fleet Company, Inc., Lynchburg, VA, USA) in 240 mL water and ingested 10 mg bisacodyl tablets followed by 1,500 mL water at 7 pm. They ingested another 45 mL aqueous Fleet Phospho-soda in 240 mL water followed by 1,500 mL water at 10 pm. We performed the colonoscopy with a colonoscope (Q260AL, Olympus Optical Co., Ltd., Tokyo, Japan), recording the location and size of all polypoid and sessile lesions. Small polyps, less than 1 cm in diameter, were removed by snare polypectomy or hot biopsy during first-look colonoscopic examination, and large polyps including cancers were treated electively by endoscopic mucosal resection or surgical operation. All polyps or cancers removed endoscopically or surgically were fixed in formaldehyde and sent to the pathologic laboratory for routine histologic examination. The histological evaluation was made according to World Health Organization (WHO) criteria.

All of the endoscopic examinations were performed by experienced endoscopists blinded to the results of the questionnaires. Informed consent for sedated endoscopy and use of personal data for research purposes was obtained from participants before endoscopy.

Pearson chi-square test or independent t test was employed to assess the difference in risk factors between the two groups (presence and absence of IBS). Risk factors for IBS were estimated with odds ratios (OR) and 95% confidence intervals (CI) using logistic regression analysis. Significant risk factors revealed in univariate analysis were subjected to multivariate logistic regression analysis. We used STATA software (version 10, College Station, TX, USA) for our analyses. All statistical tests were two-sided, and p < 0.05 was considered statistically significant.

The prevalence of IBS increased with decreasing age in this study, with a decrease of about 50% in participants of age more than 60 years, compared with participants of age less than 40 years. The inverse relationship between IBS and age has been suggested in previous studies from Korea, even if they did not show a statistical significance for the association between IBS and age.5,6 Previous studies from Western populations have also suggested the association between IBS and young age.2,9,19

This study has several strengths. First, we excluded organic bowel disease by using the results of colonoscopy and abnormal laboratory tests. Second, the data were of high quality. Colonoscopic examinations were performed by gastrointestinal specialists, and anthropometric parameters were measured directly instead of by questionnaire. The third strength was the large size of the study, which allowed us to evaluate subpopulations and their interactions after adjusting for many confounding factors.

This study also had several limitations. First, the population was a self-motivated screening cohort. The IBS patients with severe symptoms may be evaluated as outpatients, so this study may underrepresent severely symptomatic IBS patients and the prevalence of IBS may be underestimated. However, whereas persons who had lower gastrointestinal symptoms were more likely to undergo colonoscopy, persons who had no gastrointestinal symptoms were less likely to undergo colonoscopy, and thus, the prevalence in the eligible subjects was higher than in the total population. Finally, the prevalence of IBS in this study is similar to the prevalence of IBS in population-based studies using telephone interview surveys.4,5 Because a population based-study using colonoscopy may not be realistic, our study using a screening cohort without serious underlying diseases may be an alternative. Second, degrees of psychological and physical stress were evaluated by the scores reported by participants subjectively using a visual analogue scale, not using validated questionnaires. Although there are many methods to assess psychosocial factors, there is no standardized method. Therefore, visual analogue scales may be alternative tools for assessing psychological and physical stress.

In conclusion, the prevalence of IBS is 9.1% in participants in a health screening program after organic diseases were excluded, and IBS had a positive association with psychological stress, female sex, younger age, and current smoking. 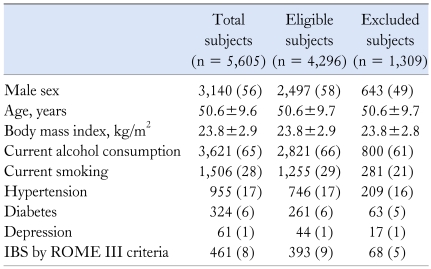 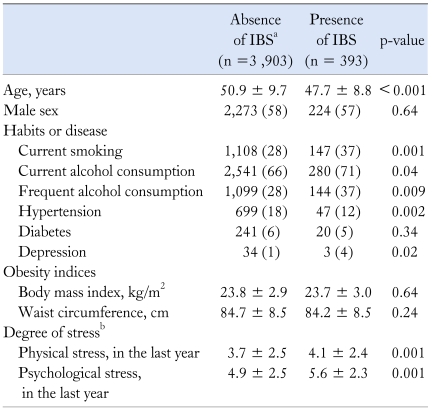 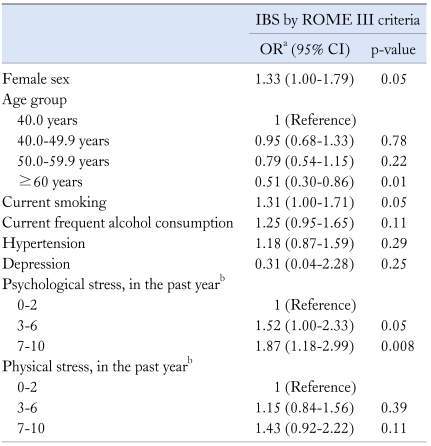